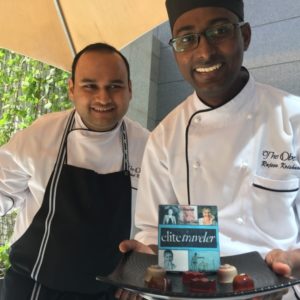 It is not often that a single dish can blow the luxury traveller’s mind, but this happened at The Oberoi Dubai. First, take the setting, namely the inner courtyard of a hotel that is very commercially oriented, in the burgeoning Business Bay part of town. (For those who have not been in Dubai recently, the Emirate has reverted to the millennia-old Middle East habit of naming shopping and other districts according to their trade: ‘the gold soukh’, ‘the carpet soukh’ and so on. But now it is areas of the expanding city, say ‘Media City’ and thus ‘Business Bay’). The gal, who as regular followers know, never, or almost never, eats dessert, was tempted by the passion with which a young chef described the camel’s milk icecream. See the video below, the photo above, and the photo to the left with chocolates, and a display card they had thoughtfully made. 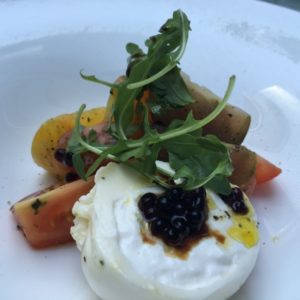 What more can one say? Camel’s milk, by the way, is high in linoleic acid, and lower in total fat than cow milk, and it has more iron and vitamin C, apparently. It is also local, here in Dubai, so for those who want to eat-UAE, this is for you, as are the ingredients for caprese. Al Ain, an oasis that is part of Abu Dhabi, has always been lush, in agricultural terms, and the salad products from there are delicious.   There is also the highly regarded Italian Dairy Products (IDP) factory in Sharjah’s Hamriyah Free Zone. Owned by a Milan couple, Leo and Silvia Condemi, with a production team and GM from Italy, IDP uses milk from cows in Al Ain: its range includes Burrata, Mozzarella, Ricotta and Scamorza. Karim Bizid, the ultra-enthusiastic GM of this luxury hotel, would make the world’s best Tunisian concierge if he had stayed in the country of his birth. 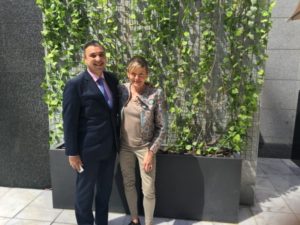 As it is, Mr B is forever optimistic. Before the 252-room hotel opened in 2013 he promised three things to his big-boss, P.R.S. (Biki) Oberoi, who had long been a guest at his previous hotel, Jumeirah Emirates Towers here in Dubai. He would open the hotel on time (he did), he would get the face of Dubai, Sheikh Mohammed, VP and Prime Minister of the United Arab Emirates, and Ruler of Dubai, to that opening (he did) and he would achieve AED1,200 ($326) average rate. He is working on it, he promises, with his trademark smile – which broadened widely last Sunday, April 24th, 2016, when Marco Pierre White, doing duty as VIP at the 350-strong gala dinner at Palazzo Versace in Dubai, handed Karim Bizid the award for Best Business Hotel in Dubai, as voted by the readers of Business Traveller Middle East.  Being a good business hotel is not only about providing meeting space and so it, it is complete customer service.  One London-based businessman, who checked out of Oberoi Dubai only this Thursday, April 28th, wrote to me:  ‘The staff at The Oberoi were just brilliant, we asked them for a recommendation for dinner last night and they sent us to a wonderful Arabian place where the food was out of this world. We then saw the fountain display and went to the top of the Burj Khalifa using the advance book tickets that the Oberoi staff kindly helped us to book …breathtaking’.  And, to be honest, even business tycoons love icecream – SEE THE VIDEO BELOW