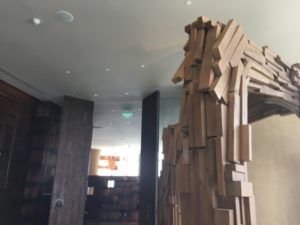 Part of a construction, dragon ‘legs’

Just occasionally the gal has a mouthwatering, eyes-opening surprise, and that happened at Guangzhou’s newest luxury hotel, Park Hyatt Guangzhou, which opened December 2015. Outside, Goettsch Partners’ architectural concept is striking, but not exactly unique (think of the segment-shaped Hotel Unique in São Paulo for that). But inside, what Super Potato has done, truly is a once off. The hotel, on floors 63 to the 70th floor rooftop, is mostly champagne marble, but inset, and round and about when the designers feel like it, is one big story of a dragon. See the video below. 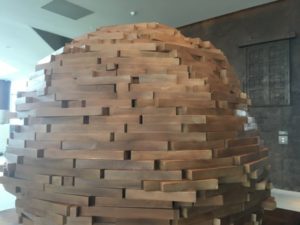 A dragon ‘nest’ waits in the lobby

Bits of the dragon appear here and there. His body, or part of it, wraps around the ground floor reception area. Twelve-foot tall legs are set there, in a style reminiscent of a Louise Bourgeois standing spider sculpture or a Philippe Starck lemon squeezer. From a ceiling corner above the three-floor lobby, starting at the building’s 63rd floor, two giant ‘balls of knitting wool’ hang, a reminder of the kids’ treehouse play area at Soneva Kiri, on Koh Kood Island. All these wood addenda are made of recycled bits, by a Hokkaido-born artist, Tadashi Kawamata. Hotel GM Anthony Gain, a would-be engineer from Melbourne, described how he saw the bits of the dragon taking shape over the nine months he was here before opening. 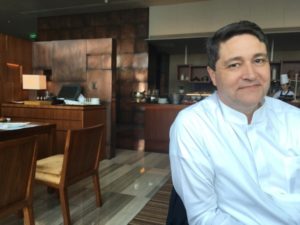 The 208 bedrooms are fascinating, too, with all-wall windows and what seem like dozens of international sockets and USB charging outlets. Desks are not wanted, I am told. In their place stand big, like seven-foot diameter, circular tables and enough chairs to be able to entertain as a foursome. I like the drawer minibars, too, their fronts covered in pale walnut. Interestingly Anthony Gain shared thoughts on putting the message out about this striking new hotel: do not start too early, he told me. Short attention span today means do not announce new hotels, even Mother’s Day specials, further out than a week ahead (Guangzhou has no more than 20 KPIs, key people influencers, he says – they are millennials running informal concierge services or exclusive car clubs). 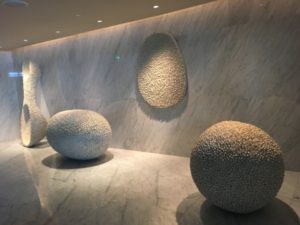 Of course being Hyatt there is phenomenal food. Even in such a new place, while buffet breakfast and lunch both work well with outside pickup, dinner, only à la carte, was slow to pick up. Rather than succumb to putting in buffets, the hotel added table cloths and candles, and, by word of mouth, dinner covers doubled (this is Anthony Gain’s fifth hotel opening, though only his first as GM, and he knows immediate adjustments often have to be made). At lunch, every buffet item tasted not only fresh as if from the imagined garden outside, but also organic, and healthy as possible – afternoon tea, obviously not as healthy, is indeed also fresh it is made right here, from scratch, in the tea lounge near the working kitchen. And the spa is very special. Here the luxury hotel has cast aside its dragon association in favour of giant sculptures of kitchen items, perhaps used for preparing apothecary or spa requirements. I cannot wait to come back, for an Omorovicza treatment – to go with, please, another buffet lunch and, perhaps a drink upstairs in the indoor-outdoor bar on the building’s rooftop. Until then, check the ‘dragon’ video, below.