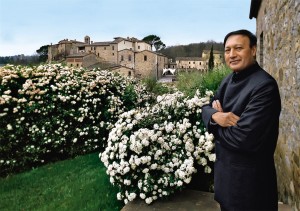 Dr Mosaraf Ali has a fan club.  Members include Morgan Freeman, HRH The Prince of Wales, Sylvester Stallone, Samuel L.Jackson, Andrew Lloyd Webber – and this girl.  All the big names are listed on his latest book, The Neck Connection, A Revolutionary Discovery, Supported by Logic, Proved by Experience and Endorsed by Thousands, by Dr Mosaraf Ali MD, www.drmali.com

Morgan Freeman says ‘I promise you, this is amazing stuff’. Lord Lloyd Webber admits that ‘Dr Ali tells you everything about your symptoms that you don’t want to hear, then how they came about, then he cures them’.   I am reading an advance copy of the book right now.  I see I should avoid white wine and beer, sugar and chocolate – fortunately nothing about red wine. 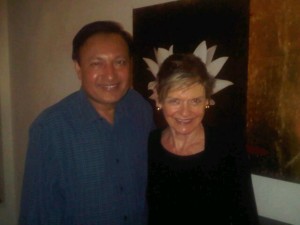 With a new fan, at Castel Monastero

It was a glass of Lionello Marchesi Castello (sic) di Monastero San Cristoforo Sangiovese Toscana 2008 that Dr Ali was drinking when we first met, on an outside terrace at Castel Monastero, Tuscany, where he holds court (sorry, surgery) several weekends a month, when he is not at his London base or on a private yacht of one of his Middle East clients.  That evening, he had just flown in from New York, and two days later he was off to Moscow. Such is life.

He arrived at Castel Monastero, and his charisma almost preceded him.  He is a brilliant conversationalist, sharing stories of how he learned Russian (as a medical student back home in Calcutta, he avoided being diverted to run his family’s golf import business by winning, out of 40,000 applicants, a scholarship to continue studies in Moscow, which led him to complement traditional medicine with alternative offerings).  He told us about his studio in the Himalayas, his work with the handicapped.  There is nothing weird about this guy.  He drank his red wine, finished his meal with countless biscotti dipped in something sweet. 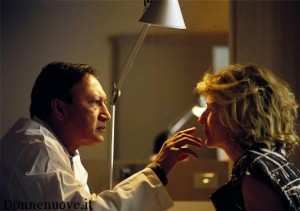 The following morning, in the spa’s clinical surroundings softened up by signed photos of fan club members, he looked into my eyes (women, he says, are much more attuned to nature than men).  I had a Marma pressure-point massage from the spa’s Argentinian wonder, and those pushes on the neck certainly made a difference.

What is good enough for the fan club members is more than good enough for me, as long as I can return to the luxury hotel that is Castel Monastero, for some more of Dr Ali’s revolutionary discoveries and another of the world’s best capreses.