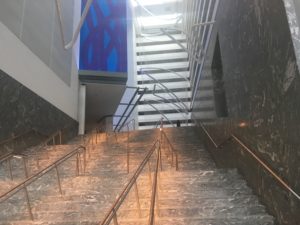 Up the stairs, to the lobby

The gal was in for continual surprises during her short stay in New York. One day the diary included a trip downtown, down so far it seemed like another country, or at least next to Brooklyn. The Conrad New York, soon to be restyled Conrad Downtown (to distinguish it from Hilton-managed The London New York, to become Conrad Midtown), is actually an art gallery that happens to have 463 bedrooms attached. It opened March 2012 as Embassy Suites but the owners, Goldman Sachs, quickly realised it needed a luxury brand. Look at some of its art. Above, says the gal, is Loopy Doopy (Blue and Purple), a mammoth installation over front desk. 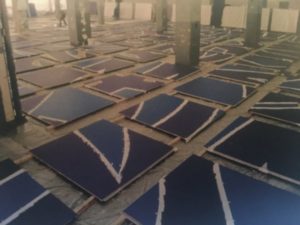 This is by Sol LeWitt, 1928-2007, and instantly brings to mind his seven-colour Irregular Wavy Colour Bands piece above the lobby of Park Hyatt Zurich – total area 53 sq m. This one, with two colours, is 100 feet wide by 80 feet high and, as the image on the right shows, it was painstakingly formed from acrylic, in pieces, and then put together here, to dominate the 15-floor open atrium. In front of it hangs a veil, like a sugar-art dessert this is Veil, by Monica Ponce de Leon, and it is formed of 77 tons of aluminium and 16 miles of cable. Yes, this really is a tremendously striking hotel. Architects Kohn Pedersen Fox have made the entrance a carpet-free ‘red carpet’ experience. Take the elevator, or escalator, or 36 stone steps up to the main lobby, and the art scene. 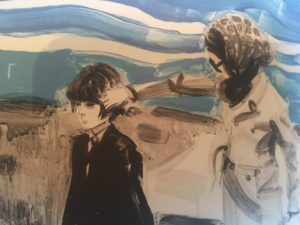 Another of the many pieces that I especially like is John & Jackie 2000, a 24 by 19 inch lithograph by Elizabeth Peyton (she has also done Prince Harry and Prince William but the likenesses are barely recognisable). Clever Goldman Sachs putting in so much art, here, and clever somebody, too, for giving the complex’s dining scene to restaurateur Danny Meyer. He runs four restaurants down at ground level, outside operations with no signing for hotel guests. He also runs the agreeable all day eating place leading off the lobby, a venue that obviously attracts those who stay here. Interestingly, as well as financial and other business guests, and meetings and other groups during the week, weekends are increasingly popular as staycations, including for New Yorkers who hop on a train south to Rector, tempted by the hotel’s art, and Hudson River views, and bedrooms that are all suites, starting at 560 sq ft, 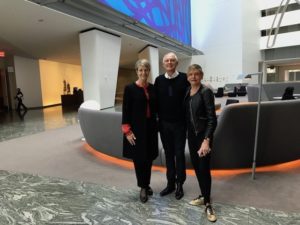 This is such a thriving part of town and it reminds us of Sydney, say hotel GM Marlene Poynder and her husband Brian Fearnett. They love the downtown for its space, light, water, and fantastic retail. I must say visiting this luxury hotel was an eye-opener and I cannot wait to return.