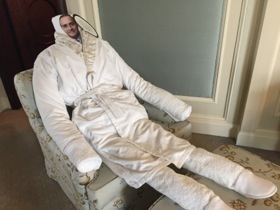 ‘Rami Sayess’ in the bedroom…

The gal finds her life in luxury hotels is full of firsts. How about this? Arrive in suite 1506 of Four Seasons Doha and there is a stuffed dummy, formed of bathtowels and a bath robe, and a photo likeness of the hotel’s esteemed and hilariously funny GM, Rami Sayess. ‘Mr S’ stayed on, staring at the bed all night long. Five years ago, the capital of Qatar was a somewhat sombre place, with much more sand and less greenery and architectural sculptures than now. Things have obviously changed. 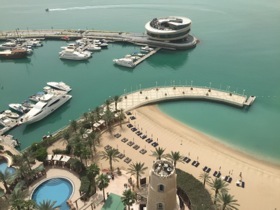 .. from which I can look down at the brand new, snail-like Nobu

From 1506 I look down, at the hotel’s marina and across to a giant ‘snail shell’. This is the world’s largest Nobu, which opened April 18th, 2015. It was a busy night. Among those who were determined to be there for the first sitting was Minor boss Bill Heinecke, from Bangkok, and it is quite likely that one of Qatar’s main movers-and-shakers, Akbar al-Baker, head of Qatar Airways, was there too. The night I dined in the 240-seat restaurant, the 200-plus other diners included the Emir’s sister, Sheikha Mayassa Bint Hamad Al Thani, the 31-year old whom many call the most powerful name in the art world – she chairs the Qatar’s museums as well as Doha Film Institute, and has three young sons (she married her second cousin in 2006). There were masses of tables of black-clad-local ladies, and other tables of white-clad men, and some mixed tables, and not only expats. 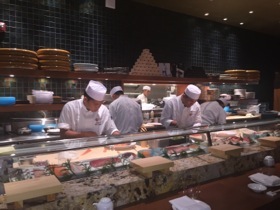 David Rockwell’s design for this multi-million restaurant, cantilevered over the water, reminds me a bit of the spiralled Flying Elephant at Park Hyatt Chennai. Here, Nobu has at least seven different eatertainment areas, including a rooftop open-air space with stunning views of Doha at night. You enter at the lowest level, past the open kitchen, where everyone shouts in welcome to new arrivals. We dined not far from the kitchen, watching some of the 120 Nobu people gliding around, bringing menus and drinks and foods including tasting platters as starters. 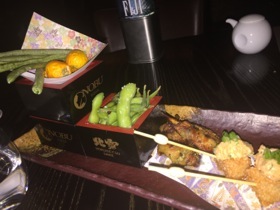 Andrew Bozoki, Nobu chef here, came from One&Only Reethi Rah in the Maldives but he had been with Nobu before. Now he is cooking at a rare ‘luxury hotel restaurant’, one that has its own brand and, frankly, it is too far from the hotel to be able to do room service. We started with our tasting platter, moved on to salad with Matsuhisa dressing and, of course, black cod yuzu miso and more. No space this time for a brick oven dish, say a Nobu-style veal chop, and we stuck with wines by the glass rather than saké or a bottle of Ch Cheval Blanc Premier Grand Cru Classé 2007 (11,000 Qatari riyal, or US$3,021).