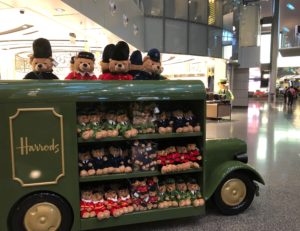 Doha’s Hamad International Airport (HIA) is such a delight that the gal wonders what would happen if HE Akbar Al-Baker, Group CEO of Qatar Airways, were to get his hands on designing a luxury hotel. The assumption is that it would be pretty terrific, and fun. Of course there is Harrods at Heathrow, in England, but the one at HIA is bigger and much more relevant as Qatar owns the London store (come to think of it, there has been talk for years of doing Harrods hotels and John Johnston, after a long career at Four Seasons, was appointed President of Harrods Hotels in 2014, with the lure of a Kuala Lumpur project, but it, and the idea, never got off the proverbial drawing board). 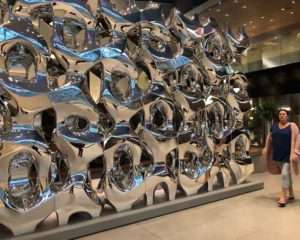 Welcome to the lounge

HIA opened as a brand new airport, five miles from the ‘old’ airport, in 2014. It was built, partly on reclaimed land, to cope with 50 million passengers a year – the last half-year figures, January-June 2017, saw 19 million passengers, and many of them must have been fixated by ‘the lamp bear’. At Terminal One, airside, the main focal point does seem to be a gigantic bear with his head in a lamp – OK, do not ask (see above). This is Swiss sense of humour, as sculpted by someone called Urs Fischer. The bear was displayed at the Seagram Building and sold at auction by Christie’s, and yes, someone in the Qatar Royal Family paid $6.8 million for the 22-foot thing. Then all 19 tons of it had to be shipped, or flown, to Doha, and there it sits in the terminal. Goodness knows what HOK, who designed the terminal, thought of this intrusion into an overall plan of simplicity. 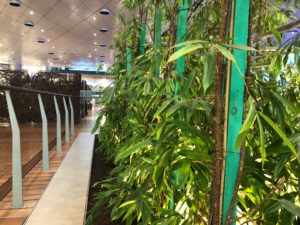 Live bamboo screens in the lounge

There is absolutely every reason to fly Premium when leaving HIA on Qatar Airways. The landside dedicated check-in area is huge, and each agent is separated from those either side by six-foot screens that extend well into the seating area. This means that when checking in you have absolute privacy (though I cannot think why you would need it). Premium also has what could be called the ultimate lounge experience, namely the utilitarian-sounding Al Mourjan Business Lounge. Designed by Lindner Depa, this stretches, it seems, forever – and I did not even get a chance to see its upper level or its spa. I loved the stainless sculpture at the entrance and, inside, bamboo screens, and open-twig privacy screens around some seats. 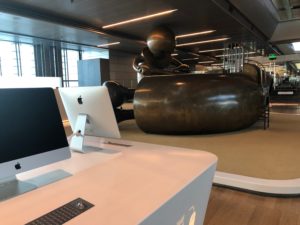 Every seat, by the way, is given privacy (yes, yet more vertical screens) and each one has a USB port and an international socket, plus a full-size iPad that clearly shows the time. See the video below to tour the large restaurant, where food is brought to you. On the way out I passed neat piles of today’s newspapers, including The Financial Times and the international edition of The New York Times. I discovered later that even Economy passengers can pre-book lounge access, for $123.57 per person, which helps to justify flying Premium in the first place. NOW DO A QUICK TOUR OF PART OF THE LOUNGE