A dog, in Japan

Japanese are perfectionists when it comes to detail.  On leaving Grand Hyatt Tokyo, the gal was given a tiny pack of different patterns of origami paper. At the extensive Japanese tourism exhibition during the World Travel & Tourism Council Global Summit, local people in traditional dress showed how to fold origami, and how to bend straws…

It is not surprising, therefore, that when it comes to dogs, their favourite is a toy poodle – 91,683, some from top breeder Toshinori Omura, are registered with the Japan Kennel Club.

Next most popular is the chihuahua, at 71,163, followed in turn by miniature dachshund, Pomeranian and Yorkshire terriers.  Such erudite information comes from the latest issue of Monocle magazine, whose brains, the far-from-miniature Tyler Brûlé, was also staying at Grand Hyatt Tokyo the same time as me, but we must have been on different time schedules.

Another dog, another poodle, another haircut

Even robot-owners avidly read such monthly magazines as Aiken no Tomo (Loved One’s Friends), but they are saved that 45 euro monthly bill for food delicacies from places with catchy names like Kitchen Dog!

Oh aren't they gorgeous but.... back to the real world, gal

Hotels must therefore be pet-friendly – goodness gracious, put in dog hotels Japan and Google comes up with spas where little Fido or Yoshie can enjoy warm onsen hot baths.  But to cater to the national obsession with hygiene, at Ritz-Carlton, for instance, dogs have to enter the hotel through a separate entrance where they are cleaned before being allowed further.

You see more dog beauty parlours than hairdressing salons.  Where are the equivalents of Nicky Clarke, and Warren Tricomi, the Hamptons trimmer who is also in Miami, at W South Beach Hotel & Residences, and at The Plaza in New York.

Going back to the Japanese love of space, they must love both these hotels, by the way. At W South Beach, designer Yabu Pushelberg – the pair who did, among others, Four Seasons Tokyo at Marunouchi – has exaggerated the height of the whole-block lobby, and put in a really stunning boutique as part of it. Shop here, head straight outside to the beach and boardwalk, come back in for a bite, say at the Dutch Café, surely the perfect lazy vacation for some.

In New York, designer Gai Nauer, daughter of the lead developer and most prominent owner Yitzhak Tshuva of Delek, has produced a two-floor high lobby with finely-tiled marble floors, soaring windows and five big chandeliers over.  You can imagine Eloise coming in, her eyes wide with amazement….

In the lobby, a bar in one corner has a mirrored rear wall reaching some 20 feet high.  Its shelves hold an odd assortment of drinking glasses. They all miraculously change colour, gradually but simultaneously, from dayglo fuchsia to green and then blue and so on.  Look up, from the lobby floor, west to the Champagne Bar.  Look up, north, to an Assouline bookstore, run by publishers Prosper and Martin Assouline. 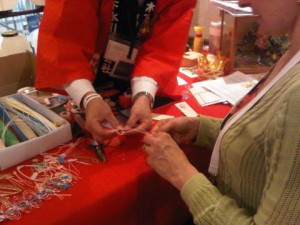 Assouline is, by the way, producing a Greek Destination Guide, with guest contributor Zoe Cassavetes.  The idea is to encourage visits to Greece, specifically to stay at the seven members of Starwood Hotels & Resorts’ Luxury Collection.

I know two of these properties, love them both. When last at the Grande Bretagne in Athens, I even met King Constantine.  Which other luxury hotel can offer corner suites that look out both over Syntagma Square and also Parliament. 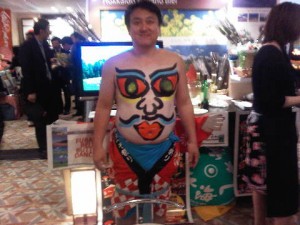 This was the idea of Paul James and his team – he heads both Luxury Collection and St Regis, and it is he who pushes the whole St Regis and polo thing, including getting Prince Harry to play in Brazil last month, and now there is a link up between St Regis and Bentley cars.

I did see one or two Bentleys on the streets of Tokyo, by the way, but 95 percent of the cars are square box-shaped, with a forward protrusion for the engine.  These are so ugly, and thus so un-Japanese, but in fact there are some eyesores in the country.  See this guy, in some kind of traditional ‘dress’, namely a loin cloth and body paint, at the above-mentioned Japanese tourism exhibition… Japan, you are full of surprises.