Onessa Ahmed and Richard Cotter on the terrace of The Raleigh

Dinner at The Raleigh, Miami Beach, with the happiest newly-weds a gal could hope to see – the divine Onessa Ahmed and her equally-super husband Richard Cotter.

All of three weeks into their married life they just exude – a love for life.  Tonight she has a little Armani cape over her equally little dress (she is so tiny that her first engagement ring flew off her finger when she was parking her car).

Onessa was working for Armani when she had a meeting with Elaine Wynn, then-wife of mogul Steve Wynn, to propose Armani uniforms for Wynn Las Vegas.  She got the account.  Richard Cotter, who actually made Wynn’s eponymous hotels ‘work’, was in that meeting.  They met again a year or so later and, bingo…

Richard is now overseeing a fledgling hotel group that will revolutionise Caribbean-fringing mainland beach areas, The Brilla Group.  He is also currently running the group’s iconic The Raleigh, on Miami Beach’s Collins.  This is a jolly friendly luxury hotel with warm and want-to-be-friends employees or team members.

The evening starts. We go out to the rear wood deck, behind the lobby of the 1940-vintage hotel to the oh-so-2012 dining venue.  A trio of elegant young women in black, one with incongruous black boots, offer a selection of tables, up on the deck or down six steps to the pool level.

We sit up on the deck, looking into lantern-lit palms and seagrape trees. Our wood-slat table has a candle in a clear sconce, to complement those lanterns.

The menu is so simple you can hardly believe this is not a down-your-street diner, but WOW the result.  Richard Cotter has partnered with local heart-throb chef Michael Schwartz, whose fresh-to-table Michael’s Genuine Food & Drink, which started in Miami’s Design District, now also has a freestanding branch in Grand Cayman.

Schwartz is one busy guy.  He appears on The Cooking Channel, where he recently showed a hogfish ceviche, and he guest-chefs on Royal Caribbean chefs (OK, I know, those are the so-called monstrosities of the seas that any discerning cruiser who prefers the intimate style of Silversea – or Seabourn – would never try…) 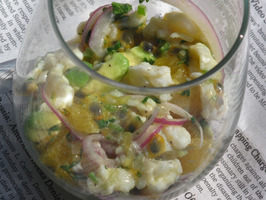 Michael Schwartz’ chef on the spot, here at The Raleigh, is Sam Gorenstein, a Colombian-Syrian. At our table, we nibble addictive sourdough bread slices. Our appetisers are oysters of the day, on a tall stand, and a superb Burrata on a tomato confit with herb oil.  Then comes the beef.

My man declares his filet best-ever. My Delmonico T-bone is, well, sensational. A big oval skillet is brought near red-hot so that its contents sizzle, but miraculously the sliced, boned meat is rare-to-perfection (I quickly remove the herb butter topping, and I leave its potato chunks in favour of some of the light-as-air string fries that come in a paper cone).

A Laguiole knife reminds me of home. There is just about room for a  shared platter of paper-wrapped bite-size beignets with three dipping sauces, caramel, raspberry and toffee.

The Raleigh is being repositioned – up.  It is being aimed at the locale, discerning diners and partygoers who will come here for drinks, lunch and dinner, and breakfast.  They will hold functions here, and get married.

My steak Delmonico, sizzling in a piping hot skillet

I can vouch for the breakfast. You can get snacks, if you must, from the 24-hour Caffè.  I went in at 0630. A cheery young Latino in crisp whites says Hi and continues, using his gloved hands, delicately transferring over-sized gorgeous-looking muffins from a big card box to d’oyley-covered high silver stands, over which he then puts glass domes (which he has checked for smears).

I ask for an English Breakfast tea. Cup or paper mug? He takes down the appropriate Passion of Tea tin and spoons loose leaves into a long teabag, puts it into a mug so that the bag easily hangs over the edge, pours in boiling water and gives it to me with a china jug of fresh milk.  Stylish.

At breakfast proper, back outside on the terrace, everything is calm, and last night’s candle sconces have been replaced by metal stands holding Bonne Maman jams from France. Quiet samba music plays.

My Russian neighbour pairs apple pancakes with two boiled eggs. I simply go for orange juice and coffee, both rated ten out of ten, and the ‘wholegrain toast’ is as good as anything a bread addict can get in Europe (and in the USA would be rated beyond maximum).  Style, again.

On the events side, it is The Raleigh that such cognoscenti as Architectural Digest magazine, London’s Tate, Los Angeles’ Museum of Contemporary Art (MOCA), plus Tiffany and many more key names, picked for their parties during Art Basel Miami Beach last month.  And when it comes to weddings, this is where Richard Cotter and Onessa Ahmed chose to marry, in the hotel’s Presidential Suite, with four of the hotel team among the close friends there.