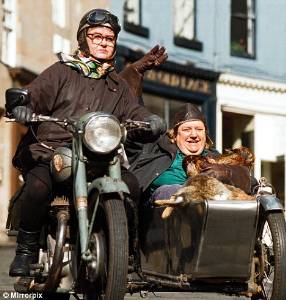 Only in such a luxury hotel as Mandarin Oriental Hyde Park, London, could a restaurant called Dinner serve breakfast, and lunch – and dinner.  When it opened, December 2010, Dinner immediately attracted much attention, initially because of its name, and its culinary Name (Heston Blumenthal), but, soon, because of its fabulous food.

Dishes of the caliber of beef marrow with parsley quickly got foodies’ attention.  Now Clarissa Dickson Wright has produced a fascinating television programme (find it on iPlayer) themed Breakfast, Lunch & Dinner. The gal was enthralled. 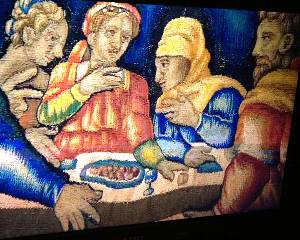 Clarissa, still as lively as ever although encumbered by far too much weight, and a walking stick, is historic in her own right.  Born into landed gentry in the UK – her father was surgeon to the Royal Family – she became a lawyer, and a food addict, and a lover of the wine that went with it.

She got into bed, figuratively speaking, with Jennifer Paterson, another enormous food-lover. Their how-to-do-it cooking series Two Fat Ladies was top billing for years… I remember the time Jennifer arrived late at a dinner.

She strode in, dressed as often in biking leathers and carrying her helmet. She died of lung cancer in 1999: her last few days, in a London hospital, she held court with friends, smoking nonstop and drinking the best that they could bring her. 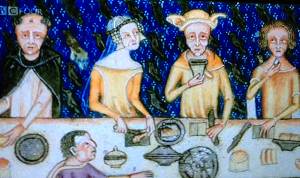 .. and, later, eating with a slice of bread used as a plate

Clarissa’s current Dinner, one of three episodes, is absolutely fascinating on the meal. It used to start at midday, because of lack of light, but as candles got better, and lamps and then electricity came in, the meal got later and later.

In the Middle Ages there were no plates – slices of bread, called trenchers, were used instead. There were only knives. Eat with your fingers, wash hands before and after.  The Tudors introduced sugar, with disastrous effect on their teeth.

The Georgians brought in chandeliers, and seating of ladies and men, alternately. The Victorians, who produced horrid food, were nevertheless obsessed with dinner parties. 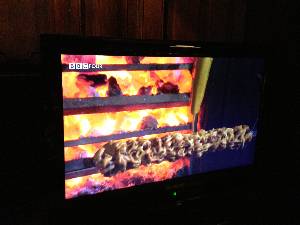 At one point Clarissa Dickson Wright talked with food historian Ivan Day who spoke about meatless Fridays. One of the non-meat dishes, made on the programme, he called haslet, which I always thought was a spiced pork meat loaf from Lincolnshire, in England.

Ivan Day’s version involves patiently threading whole almonds on a long string, like a necklace.  Wind this necklace around a thick skewer and lather the whole in a thick ginger paste. Turn the skewer in front of a fire, as illustrated.

When it is all nicely done, pull the ‘thing’ off the skewer – miraculously the thread is left behind, on the skewer – and cut into sections.  You have ‘cookies’ with an outside that looks like brandy snaps, surrounding the almonds inside.  Yum yum said Clarissa. 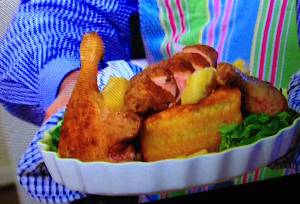 Duck breast and apples cooked, and held, by A.A. Gill

Early 20th century, she says, was no-style food, with two world wars plunging much of the world into make do with whatever food you could find. She brought food writer A.A. Gill, whose restaurant reviews appear in the Sunday Times, a paper that would be one of the ten best in the world were it not for the fact it is owned by the Murdoch menagerie.

Adrian Gill, as his friends call him, seems to like rich-and-artery-clogging as much as Clarissa Dickson Wright does when it comes to food. He absolutely blasted Carole Bamford’s Daylesford Organic cafés – which are now in Tatler 2012’s Restaurant Guide, sponsored by Laurent-Perrier.   Here, on the programme, Adrian Gill actually cooked, producing duck breast with apples. 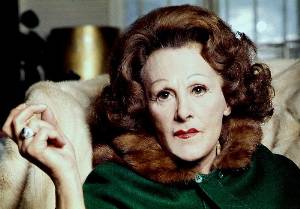 One of the queens of 20th century television was certainly Fanny Craddock (here, she looks like Priscilla Queen of the Desert). FC always dressed as if for the opera, even when stuffing a turkey on the programme. What an operatic life she had. Born 1909, a year later her mother dumped her on a billiard table and never came back.

In turn, she gave her own son away. She married four times, one bigamous. Fanny and Johnny (Craddock, with whom she lived for 40 years before finally marrying him) were Celebrities, entreating you to try Green Cheese ice Cream, or anything with cream.

She drove her Rolls-Royce from London to Monte Carlo in a record 16 hours, nearly died when the galley on her private yacht caught fire – and is it true she drove her secretary on the Daily Telegraph (a non-Murdoch paper, now owned by the brothers who have the luxury The Ritz hotel) mad, when printed recipes stipulated a tablespoon, rather than a teaspoon, of baking powder?