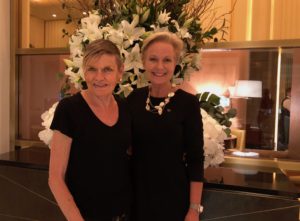 Waldorf Astoria Beverly Hills is now 15 months old and, like a human of that age, is beginning to show so much character.  This is definitely the magnet for the stylish local fashionista, and for followers of architecture, art and sculpture, and Vongerichten food.  The 13-floor sculpture of a building, by Gensler, towers over the junction of Santa Monica and Wilshire – see it above. Two GMs have moved on, but Vanessa Williams, whose title is Sales and Marketing but in fact she is a Jill of All Trades, not only sails on, triumphant as ever, helping to make this lovely luxury hotel work. 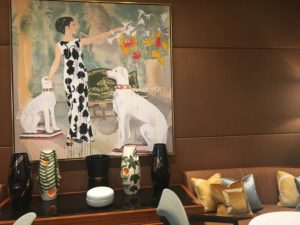 Glamour in the lobby…

The developer, Beny Alagem, was sadly otherwise engaged but I hope to see him next time (he has sold shares to Cain International since my last visit but he continues to take a minute interest in the hotel and he knows the importance of making good even better).  The rooftop bar-lounge-restaurant used to have small portable umbrellas.  These have now been replaced by six permanent mega-umbrellas, specially made by Pogessi Firenze.  These provide continuous shade. Guests appreciate this, and so too do servers. The facility gets more business, which brings in more money, which shortens the time for investment.  Win-win. Coming up will be, down on the ground floor, a Gieves & Hawkes pop-up store, just right for the awards season (this will be opposite the ongoing Bijam store, right for year-round). 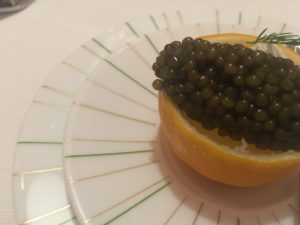 Waldorf has the brand to attract good people.  John Washko, a long-time Four Seasons foodie, now heads food and beverage here.  For our dinner he suggested a rare Seabold Pinot Noir Santa Lucia Highlands 2016, from the vineyard formed only in 2014 by master sommelier Chris Miller.  To eat, I went both local and far distant.  First came sea urchin from Santa Barbara, 90 miles away: each bite served on a crouton. Next up was grilled salmon from the Faroe Islands, 4,765 miles away, north of the Scottish mainland (American chefs do seem to favour Scottish over Canadian, or Chilean, salmon these days – is this because of President Trump’s trade policy?) 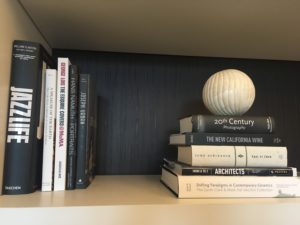 .. and in a suite, where books become sculptures

Jean-Georges Vongerichten has an incredible following.  I later checked reviews on Yelp, and found such rave comments as ‘the truffle pizza was just mouth watering’. One great thing about the eating and drinking at this stylish hotel is that it is not over the top, yet another example that luxury today can be quite simple, just as long as it is the best. And then the car awaited – for such a prestigious place as this, only a Rolls-Royce suffices.