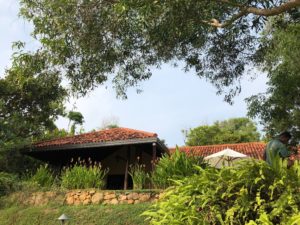 Cape Weligama is a rare Sri Lankan luxury resort in that it was conceived by people with a wealth of international experience. Its owners, the Fernando family, have travelled widely selling their Dilmah teas to over 100 countries; they know what they like, and it shows. They have been buying up parcels of land around the island for years, and after trialling ‘hospitality’ by turning tea planters’ houses into a succession of small hotels, Tea Trails, next came something on a clifftop near Weligama, in the south west of Sri Lanka. They wanted Asian designers, and chose Lek Bunnag as architect, and David Edwards for interiors, and the result, says the gal, is brilliant. Bunnag has set single-storey villas in clusters, three or four sharing a 50-foot pool: each cluster is named for a famous explorer. 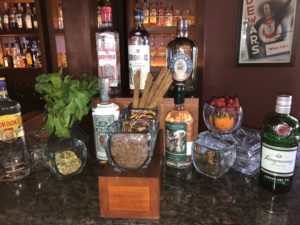 There are also two big communal pools, one that is more family- friendly, the other a spectacular Moon Pool, an infinity-edged segment shape that is about 100-feet long at its maximum. Add two beaches, a walk around the whole 12 acre estate, and a gym, and you have used up lots of exercise before heading for refreshment. I skipped afternoon tea in the Cape Club Bar – a space that soars up to a heavy-beam cathedral ceiling – but later I was fascinated by its gin bar, which included Colombo Gin, from that city, and, from the UK, Broker’s London Gin, and the so-called Original Gordon’s.  Walls around the Bar display old sepia photos of school sports teams, football and the obsession of the entire Indian sub-continent, cricket. 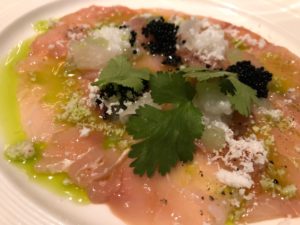 We dined outside on the terrace of the adjacent Ocean Terrace, listening to the waves far below. The menu offers international and Sri Lankan, including lots of healthy stuff. Back home in villa 1021, in the Robert Knox cluster named for the Scot who was held prisoner in Ceylon for 19 years in the early 17th century, I started reading Tea & Your Health, by Dr Tissa Amarakoon and Prof Robert Grimble (the caffeine and polyphenols in tea may, they claim, protect against Alzheimer’s and dementia). But although Cape Weligama is part of the whole Dilmah story, and is run by one of the Fernando sons, Malik, tea is not forced down your throat – they certainly do not mind you asking for coffee, for instance. 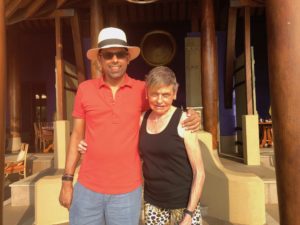 Villa 1021 is ideal for those who want privacy, and, at the same time, be not too far away from the all-day Ocean Terrace or the nearby Ocean Grill, a chef’s table restaurant. I did leave the campus once. Malik Fernando wanted me to see the community centre that the family, or rather its MJF Foundation, has just opened five minutes’ walk from the luxury hotel. Professionally managed by a former government administrator, it offers a proper curriculum of two-hour classes, including English or Tamil literacy, and maths and science. Classes are geared at pre-school through to elders, and everything is free. Really, the philanthropy and thoughtfulness of the Fernando family is endless: from the start, ten percent of all Dilmah tea profits have been given to the Foundation, and the same applies to the hotels. The Foundation is big on education and healthcare, both serious issues for the Fernando family as well. All their employees, and what seems like extended families, get free healthcare and any educational aspirations are supported – a tea packer’s child for instance, has now qualified as a doctor. It is really humbling for an international traveller to meet a family with such genuine good hearts. NOW SEE BELOW, VIDEOS OF MY STUNNING VILLA, AND AN INTERVIEW WITH MALIK FERNANDO