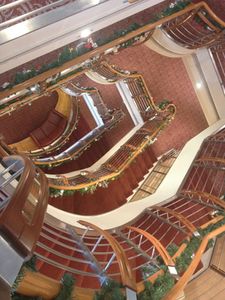 The bigger the cruise ship, the more similar it is to a luxury hotel. Take this photo, down a stairwell on the luxury Silver Shadow cruise ship. It has ten decks, the equivalent to a ten-floor hotel. One difference is you tend to move around a lot, up and down stairs from restaurant to cabin (which they call suite) and to the gym and the pool and the library and so on. Another difference is that you cannot go out to eat as there is nowhere to go, so they provide you with lots of alternatives, of which more anon.

There is a captain to steer the ship. There is also a hotel manager, who, as the name implies, oversees all of the ‘hotel’ side of the ship.  Most are former hoteliers.  Long-time Hyatt and then Regent GM Norman Rafelson, for instance, is hotel manager on the Silver Whisper. Here on Silver Shadow the hotel manager is an absolutely charming former journalist – yes, that is not an oxymoron – from Alberta, called Martin  Blanar.