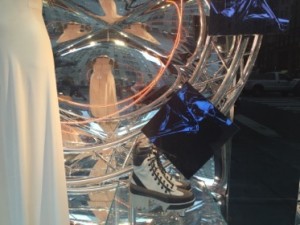 A pre-breakfast walk north up Fifth Avenue is a design delight. First the gal passes the eye-opening Louis Vuitton store, on the north-east corner of East 57th Street – it is designed by Jun Aoki, who told Designboom.com that he is an early morning man, fascinated by the sunrise (last night, just before going to sleep, he would have glanced at one of his favourite Japanese books about ghosts). Carry on walking, and there, between 58th and 59th Streets, also on the east side of Fifth Avenue, is the iconic glass box with a giant apple suspended inside. Go in, and down the stairs, to the Apple store. This is all designed by 8inc, the company that Breeze has chosen for its memorable subterranean Asian restaurant below Frankfurt‘s traditional luxury hotel, Steigenberger Frankfurter Hof. 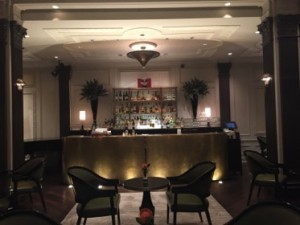 I am walking fast, to re-visit Alexandra Champalimaud‘s stylish conversion of what was the office of the GM of The Pierre into what is now a stunning eau-de-nil, or palest avocado, cocktail lounge. I head on through to the hotel’s only main restaurant – in the old days, I am told, it had a variety of eating places. A long single-height space has variously changed character from Café Pierre to Caprice and now, Sirio Ristorante, run by the mighty Maccioni family empire. I love it now. Adam Tihany‘s interiors are light and bright, and there are black and white architectural photos by his son Bram Tihany. This is the local power breakfast. As I try my bespoke strawberry smoothie I am aware of three things. The thoughtful servers, the fact that I am surrounded by tables of well-suited local businessmen, upper-GenXs through to late-Boomers – and the jams are French, namely Bonne Maman. 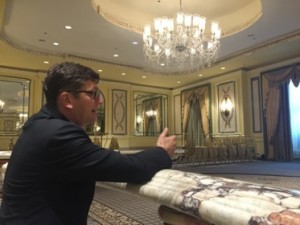 Perhaps this is not surprising since the hotel, part of Taj, now has an extremely stylish Corsican GM, François-Olivier Luiggi, and whatever the Corsicans might think they are part of France. Luiggi is actually something of an old hand when it comes to New York. Four Seasons New York, The Langham, The Mark, you name it, he has done them all. He is so excited to be, now, in an historic property that goes back to 1930. He wants to bring the 200-room hotel’s heritage alive, and add 21st century excitement (something is already working – in the five months he has been here, American Express has seen interest from its European top travellers soar, and this year there have been twice as many weddings, locals rather than foreigners, as in 2014). What will François-Olivier Luiggi do in this glorious ballroom? 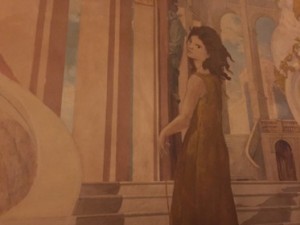 Is this REALLY Jackie-O?

And what about its famous Rotunda, the centre point of the luxury hotel’s main floor? He shows me the Rotunda‘s somewhat-crude wall-paintings, an attempt at trompe l’oeil apparently done in 1967 to replace a stark Danish minimalism that was there before. This is American artist Edward Melcarth’s ‘likeness’ of Jackie Kennedy. I am not sure that Mr. Melcarth, 1914-1973, had talents to rival any of the other designers mentioned here…