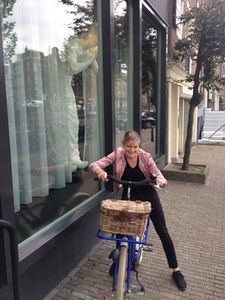 The number of cars in Amsterdam seems to decrease every year for obvious reasons – difficulty and cost of finding somewhere to park and, in addition, what must be surely an increase of cyclists growing at double-digit rates (it is also worth noting that Amsterdam’s city centre is cleaner than ever – well done Mayor Eberhard van der Laan). No-one at all wears a cycling helmet. Of course every luxury hotel in town has its own bicycles, and the gal tried one of Andaz Amsterdam’s.  Notice the white prince statue beckoning from within the hotel’s library window to the left. 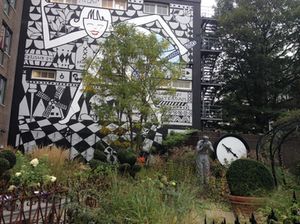 There are 16 such princes – a reminder that the hotel is on Prinsengracht.   All are from the same mould, ten feet high, wearing crowns and slightly bowed.  Some of the other princes, all grey, are on room corridors, and one is outside, in the wild garden that is bordered by the hotel’s two blocks. It has been planted and deliberately left to grow wild. Designer Marcel Wanders calls this garden Alice in Amsterdam. He has installed a big grey table, bearing giant washing up bowls covered in Delft blue designs.  Wanders loves his Delft. The hotel’s all-purpose meeting room, opening on to the garden, has a display of the KLM take-home Delft mini-houses filled with Bols, and there is a real white hard-hat, painted as Delft. 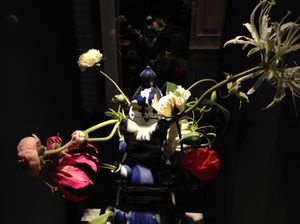 Real flowers, in the library…

Even some of the staff uniforms are in Delft colours. Women can mix and match, choose their own pieces specially created by designer Barbara van de Zanden – some will be in softer and darker blue striped tops, for instance. But Marcel Wanders has introduced other elements that are typically Dutch, like flower arrangements that looks as natural as those in many hotels look artificially contrived.  Back in the hotel library, one glass vitrine, which opens the other side to the hotel’s main entrance, has a Dutch Old Master display. Coffee is another Dutch necessity, and of course there is an espresso machine here in the library – where they also offer complimentary wine every early evening. 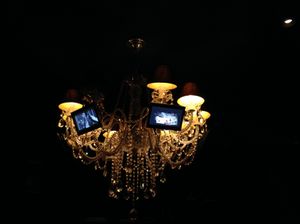 .. which has a chandelier with televisions

Overhead hangs a chandelier with mini television sets. A library-meet-up room should be an essential ingredient of every modern hotel, especially when it is fun.  Here there is an inset nook, lined in Delft-blues patterned fabric, just big enough for two.  it is occupied from early morning through late evening, as are a handful of eight-foot-high backed Dutch-red chairs in the main lobby (near the same-red staircase leading down to the red tunnel that connects the hotel’s two buildings, the red symbolising Amsterdam’s Red Light district).  And course, being Amsterdam, we must have fries, though not necessarily with mayonnaise, as is traditional. 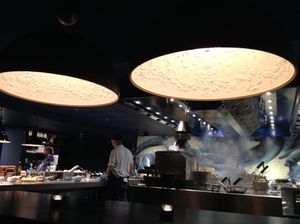 Chefs at work in Bluespoon

I can testify that Andaz Amsterdam has some of the world’s best fries, especially when they are eaten with plump, juicy, Zeeland mussels, cooked in white wine, garlic and parsley and served in a big black cast-iron cocotte). Bluespoon, the kitchen dining room, does indeed have a mosaic (Delft) blue spoon on the rear wall, behind the giant U-shaped cook area where all cooking, apart from desserts and salads, actually goes on.  You can sit, as I did, four feet from the cooking area – or choose to be more private, at a white linen table.  At breakfast, the buffet literally takes over all but one of the cooking areas. Where last night a blue-hatted, blue-aproned chef was cooking my mussels, now I help myself to yummy Bio Natur yoghurt. 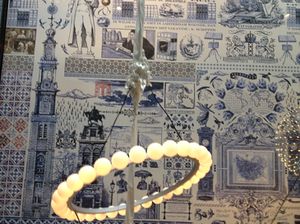 Just a section of the unique lobby atrium

That is awesome enough but what is THE highlight of this luxury hotel that is attracting every interior designer in the world is its lobby atrium.  Reminder, it soars up to the fifth floor glass roof, and three walls tell the story of Amsterdam’s past, in Delft-blue hieroglyphics, words and art, on white. The hotel’s two elevators, on the atrium’s fourth wall, have glass back walls. At ground level you enter a cabin and look at a solid wall of ‘books’ (not coincidentally, their spines or fronts all featuring Marcel Wanders, as author or subject). As the elevator rises, you look straight out at the atrium.  In the void, hanging from the roof, are three long wires ending in three, three-foot china bells, one hanging over each check-in pod.  Along the way down, the wires support LED circles, and neon zigzags….  What happens when a bulb goes, you ask? Abseilers to the rescue.