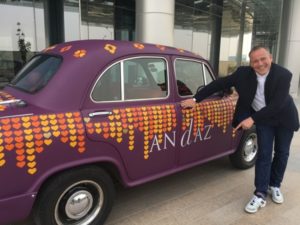 One of the many reasons for this particular trip to India is to see what’s new when it comes to luxury hotels. Andaz Delhi opens December 15th 2016, and the gal was given an exclusive tour. Pickup was by the GM, a hilarious German named Heddo Siebs who might have preferred to be out gallivanting on his beloved Enfield motorbike but he seemed amused, as was everyone else, when he arrived in a hotel limo, a bespoke Ambassador, purple with scarlet interior. As well as the hotel’s name, the exterior was decorated in dozens of hearts – they are magnetic, so the pattern can be changed at will. 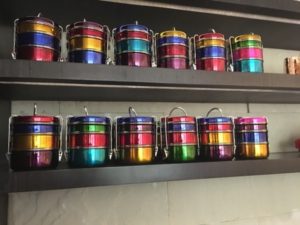 Canteens to-go, on an AnnaMaya shelf

Andaz Delhi, a stunning Cubist block by architects Bauer Latoza, is right next to the airport in the important AeroCity business zone, and it is one of 11, yes 11, hotels here (I saw a J.W. Marriott, for instance). They are all in a gated compound, with a metro stop to make for speedy transfers downtown. Being right next to the airport means all this hotel’s windows are bullet-proof, which makes for superb soundproofing. I loved the pale wood, taupe and cream colouring of the 401 rooms, designed by Carlos Virgile, now working as Virgile and Partners: rooms as well as suites have their own WiFi antennae, up to eight devices each, the espresso machines are local Bohemian, and there are boxes with three different Clive Road teas. 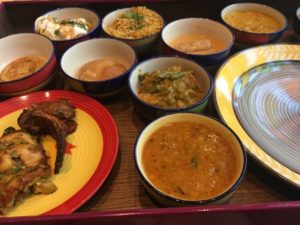 I also loved the stunning bling-bling pens, and a pack of postcards labelled ‘401 reasons to fall in love with Delhi’ – the pack I was given had cards explaining the city’s bangle bazaar, its Jain Bird Hospital, and a ‘street called Susan’. Since they do not fit into the hotel’s 401 bedroom-and-suite count, I wonder if the 129 residences-to-let, for long-stay guests, also have these cards? I was shown what will be a Hong Kong club entertainment centre with night club, I was told about the spa and gym, and then we went to the massive ground-floor AnnaMaya food hall, based on two mythical Indian sisters who travel the world. 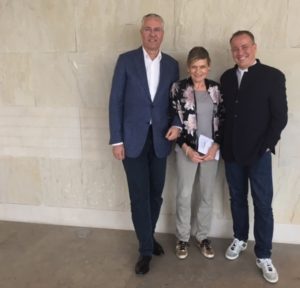 Training of some of the 750 team members was going on – see the video below, which hilariously shows youngsters labelled Chef and Anna and so on acting the roles of the sisters travelling. And then we, Heddo Siebs and Hyatt’s man in India, Kurt Straub, who is obviously minutely involved in setting up this luxury hotel, were served tasting lunches, in superb brightly-coloured leather-handled trays (to be used later for meetings, and in 24-hour room service), first with ten savoury dishes and then five desserts. When I return, to find the hotel up and running, the team will be fashion-clad; they can choose their own gear from a collection specially designed by a Delhi-based pair, Didier and Hemant of Lecoanethemant. See the image at the top of the page – AND NOW ENJOY THE VIDEO BELOW.