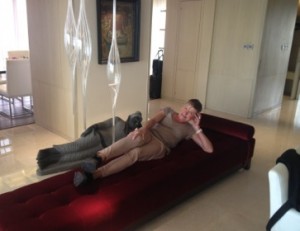 Posing with the ‘other occupant’ of suite 545

The gal is always trying to find unusual photo poses, which turn into hotel memories. There was the hotel where kayaking was order of the day, that kind of thing… at Surajkund’s only luxury hotel, Vivanta Surajkund by Taj on the outskirts of Delhi, ‘someone’ was already waiting in suite 545, a 2,200 sq ft beauty with terraces. That someone was a lady who looked as if she had been contentedly lying there for centuries, so she made an ideal pose. The 287-room hotel had opened in 2009 as Claridges and it turned to Taj management in 2013. 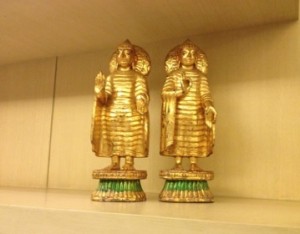 Why is this hotel unusual? Many hotels change management and brands, but this one is, regardless of who is in charge, rare because of its enormous overall footprint. Its lobby flows around an open central courtyard the size of two tennis courts. Flow from lobby and round and through the Oasis all-day restaurant and round again and you get back to where you started, which is as good exercise as going to the gym. Next feature. You are in India but many of the room decorations, chosen by the Bangkok-based firm PIA, seem more Thai – these little gold figurines in suite 545 are a case in point. 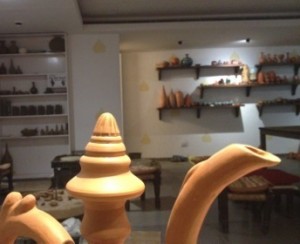 Looking into the working pottery

There are shops down in that lobby walkaround, and one of them has been turned into a pottery studio. Three days a week a potter works there, and classes are held, and I am told by the hotel GM, Rajeev Khanna, that he plans a commercial pottery workshop in the hotel (the only other in-hotel pottery that instantly springs to mind is at Vivanta by Taj Madikeri, Coorg, and that is in the grounds rather than leading off the lobby). Rajeev Khanna tells me it was his grandfather, as Municipal Officer in Shimla, who had given permission for two hotels to be built, The Carlton, which subsequently became Oberoi‘s Clarkes, and the other Oberoi in town, The Cecil, where company scion MPS Oberoi started working as a clerk. 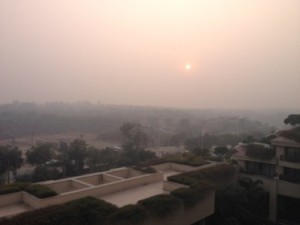 Rajeev Khanna had evolved this luxury hotel from Claridges to Vivanta, and he has been busily building up its wedding business. He had, earlier in his own working life, set up Taj’s butler programme (they were a new phenomenon in India then, he said). Although this hotel does not have formal butlers as such, the crew is remarkably well trained. My five o’clock breakfast was immaculate. I left before the sun I had seen set last night had time to get out of its own bed.