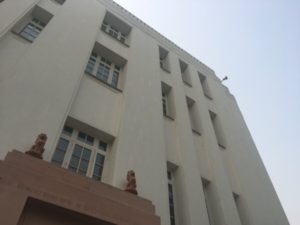 The Imperial Delhi, a Preferred hotel, is unique for its 1936 architecture, designed by D.J. Bromfield to fit in with Lutyens’ plan for Delhi as the capital of New India. The four-floor white building has somewhat narrow vertical slits of windows, as it to prevent too much sunlight entering to disturb the tranquillity and beauty within. This luxury hotel, says the gal, also shows just how much marble you can accommodate in any one space – see the main corridor, above, leading back from the entrance hall. Even the 234 rooms, especially those, like 359, decorated in Heritage style, have masses of marble. 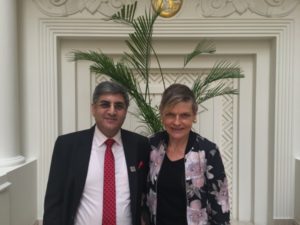 This is a hotel, too, that has a one-off boss, Vijay Wanchoo, a billiards and cricket enthusiast who also, while being a strict vegetarian, has worked his way up the food and beverage ladder (he was deemed India’s F&B personality of the year in 1994). When he first arrived at the hotel in 1994 he was given the immediate challenge of turning a big rectangular space into Spice Route restaurant, which was fortunately already being decorated, with Indian plus Cambodian and Thai artefacts and murals, by historical specialist Rajeev Sethi. Wanchoo was dispatched to Thailand, to source food ideas and in Chiang Mai he bought all the celadon needed for the restaurant, even though the menu was not planned at this stage. 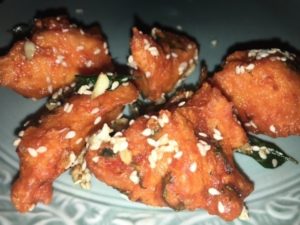 See the video of Spice Route, below. The design divides the main 150-seat restaurant into nine intimate areas, and there is also outdoor terrace dining. Wanchoo, who left the hotel in 1999 and returned ten years later as VP and GM, cleverly makes sure the printed menu lists all dishes together rather than a Kerala section, say, and a Thai section. I went for two house specialties from Kerala, meen arvat anjj, fried fillet of sole with curry leaves and Kerala masala, followed by irachi porichathu, boneless lamb marinated with Kerala masala, tossed with onions and red chili powder. 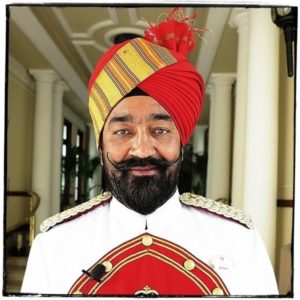 The lucky Club de Chefs des Chefs, presidential and royal chefs convened into a Gilles Bragard- run club, dined here only last month during their annual meeting, this year in Delhi. There is so much going on, food-wise, at this luxury hotel, celebrating its 80th birthday in style: chef Prem Pogakula is, for instance, doing 1930s historical recipes at Daniell’s Tavern December 5-11, 2016. I also love eating Italian here at the indoor-out San Gimignano, and 1911 restaurant’s breakfast buffet, with its must-be-India baked yoghurts which make any packaged alternatives seem like Walmart, is truly splendid. There is so much splendour here: over 7,000 fascinating Anglo-Indian 19th century paintings and early 20th century photos, plus a superb marbled spa headed by Tara Herron, author of The Definitive Spa & Body Therapist’s Handbook – and you find doormen like these only in India! NOW SEE SPICE ROUTE, BELOW