The Oberoi New Delhi re-opened January 1st, 2018, after a planned 21-month rebuild – it had not had a complete botox since 1982. During the closure all 700 staff were retained. Only eight stayed on site, camping out in a container office: the rest were deployed at other Oberoi hotels. Designer Adam Tihany worked alongside that fount of style, Oberoi’s eternally-young octogenarian Chairman P.R.S (Biki) Oberoi. The immediate wow, says the gal, is artist Sanjib Chatterjee’s unique cross-lobby installation, Atithi, from the Sanskrit verse Atithi Devo Bhava, ‘the guest is god’. As the photo above shows, this is an alluring three-layer metal screen with precious stones. New, too, is a cigar lounge, with private boxes: this lounge is reached by the ever-popular, and well-named, Club Bar. 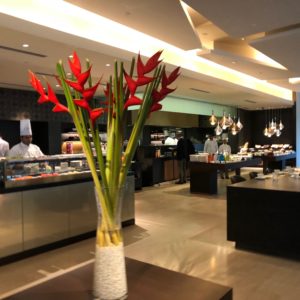 The re-opening was deliberately low-key but word got out and all the restaurants were fully booked the first night – there is now a modern-Indian, replacing the former Italian eating place. The all-day restaurant, 360°, overlooking both pools, the swimming one and the decorative one, has had its central bar removed to give an additional 12 much-needed seats – a side bar has ten counter chairs. The open-kitchen is tucked away as much as a display kitchen will allow, and it has a Josper grill: servers, who used to wear all-white cheong-sam-neck shirts, now have elements of pink stitching. 360’s menu remains the same, perhaps a little less Indian; my favourites include the burrata and beetroot salad, ideally with a glass of Natasha Oberoi’s Chitara Pinot Noir, which she produces in Geelong. 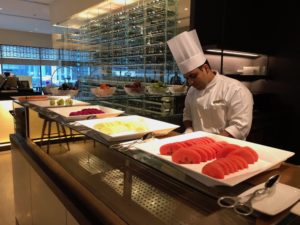 The Oberois used to have a hotel near Geelong, in Melbourne – it was such an ideal base for the Melbourne Cup. But now is the time to look forward: here in Delhi shopping will include one of the world’s biggest Stefano Rossi stores. The 24/7 fitness centre is now Technogym, and definitely more convenient, down 24 elegantly curved stairs from the lobby, and, bliss oh bliss, I was given, without asking, a satellite-printed copy of today’s New York Times, so much more appreciated than any welcome gifts of chocolates or the like. This is a hotel where Oberoi Experiences can include visiting some of the SOS families supported by Oberoi, or shopping and cooking with the chefs, or being a junior hotelier for a day. It is also very business-oriented – they have added a Residents’ Lounge, for private meetings (the Belvedere Club is members-only). They expect repeats, as before the renovation, to continue at about 42.5%. 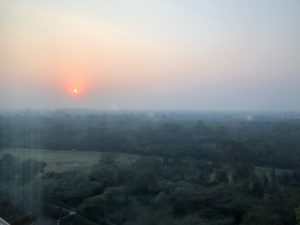 Jay Rathore, who honed his F&B skills in Hyatts from Bombay to Saipan, was personally recruited by Biki Oberoi and he has been here, at this particular luxury hotel, for nine years. This is a colourful sartorialist who cleverly reached out to GMs in some other iconic hotels to get hints about re-opening after a complete closure – he listens. In the past each bedroom apparently had inches of unseen space merely for windows cleaners, presumably specially-skinny, to get out to clean the glass. This has now be incorporated into rooms, and by, also, taking the total count down to 220 rooms and suites, the smallest room is now 360 sq ft. As the sun set over Delhi Golf Club I lay in the oval tub of suite 850 and watched the sun set through the haze, and the following morning, as the Mercedes waited to take me back to the airport, I noticed that the driver’s orange pocket kerchief was exactly the colour of that sun. Suite 850, incidentally, is a colourful array of flowers, mostly pink, from orchids via roses to gladioli. Although it does happen to have a private jogger in its spa room, I got exercise, too, in walking the 200 yards from the bathroom, in a C-shaped route via a lifesize Dimpy Menon bronze and the eight-seat dining table, to the pantry, for the LavAzza coffee maker. SEE MORE OF SUITE 850, BELOW