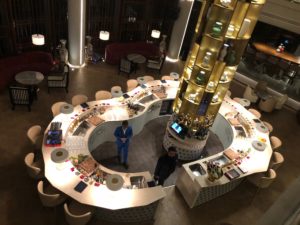 Look down at The Hong Kong Club’s central bar

Delhi’s newest must-visit evening venue, The Hong Kong Club, is only three weeks old but already it is absolutely THE place to be, says the gal – and typical customers do not realise it is part of Aerocity’s luxury-lifestyle Andaz hotel. The Club’s main entrance, above, is full of allure. Inside, the hub is the main-floor bar, with a central column that rises to the ceiling. Sit in the Club’s upper level and look down at the bar, where favourite cocktails, devised with the help of London Bar Consultants LBC, include 12 for the signs of the Chinese zodiac. The Year of the Dog, coming up next month, is celebrated with Grey Goose and Taittinger, in a Champagne flute. The Club is certainly connected with top names: its ambassador is Bollywood fashion designer, Manish Malhotra. 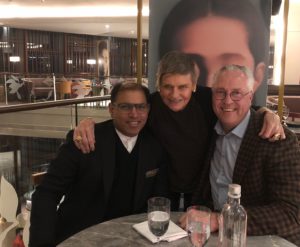 That evening, I was with Hyatt’s outgoing Man in India, Kurt Straub, who had kindly delayed his departure for his new base, Dubai (he has been elevated to look after not only the Indian sub-continent but also the whole of Africa and the Middle East), and with his replacement, the equally-charming Sunjae Sharma. They showed me the upper level of the Club, which has two private dining rooms and an open kitchen, with counter seats. We devoured far too many dim sum, out of constantly-arriving baskets, and Pekin duck that was as good as that at Made In China, in Grand Hyatt Beijing. I love the art in the Club, big Chinese faces. 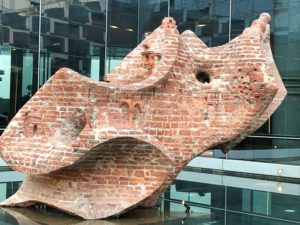 Sculpture in the hotel’s rear courtyard

But the art throughout the adjacent – though not connected – 13-month old hotel is memorable too. Outside, in the rear courtyard near the main pool, sits an eight-foot tall brick sculpture with tiny likenesses, in brick relief, of Delhi sites. The hotel is pretty hot on local immersion. See the video of suite 501, below, which finishes with the spine-up open copy of 401 Reasons to fall in love with Delhi, specially written by Fiona Caulfield for the hotel (which happens to have 401 rooms, by the way). This is a really helpful, and readable, guide to local markets, the Red Fort and so on. In the airy lobby of the hotel a wood sculpture stands as if in a bookshop and displaying postcards that, thanks to vertical shafts, twirl through 360 degrees. 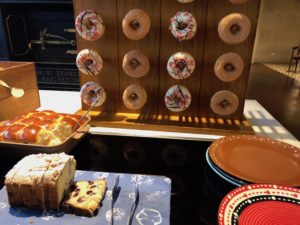 Another highlight at Andaz Delhi was breakfasting with the hotel’s two food people, Vimal Verma, a would-be soldier who was, perhaps unbelievably, diverted to hospitality via his passion for cricket, and the chef, Alex Moser, who started cooking after finding technology back home in Berlin rather dry. These two have, between them, devised the amazing all-day AnnaMaya, which could be described as a restaurant with a social conscious. It takes farm-to-table to new heights, stressing the collectives that supply everything from fresh burrata (a Benedictine-run farm) through to chocolates (an outfit supporting child education). AnnaMaya has more than doubled business in the last six months, and now this talented pair have the luxury of knowing that the Hong Kong Club will do just as well. Andaz’s entry into the Indian sub-continent is obviously already a great success. SEE A VIDEO OF SUITE 501, BELOW, and, below that, A VIDEO OF HONG KONG CLUB MIXOLOGISTS