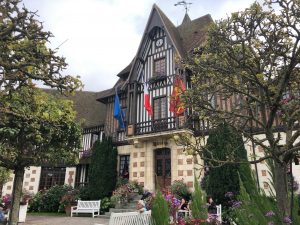 Little did the gal guess, when she arranged a two-night stay with Groupe Barrière in Deauville, that this was the exact week of the 45th annual American film festival.  Obviously all rooms in the two Barrière hotels were full but miraculously it was still possible to try both luxury properties. And what a pleasure to experience such a unique destination.  If this had been Disney the designers would have gone over the top. Here in France, the designers and contractors working for Lucien Barrière in the mid-20th century knew how to stop just before over-kill. This is the destination where such buildings as Hôtel Normandy Barrière, above, and the Town Hall, both with gardens displaying well-pruned apple trees, say English Tudor interpreted in French Normandy style. 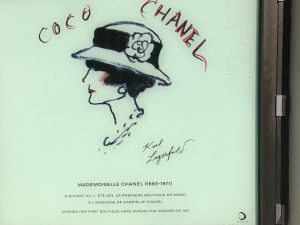 Site of the first Chanel store

And oh the shopping, with large Gucci and Hermès and so on, all in ‘Tudor’ buildings.  Manyay homage to what was Coco Chanel’s first-ever boutique, and all three divisions of this privately-owned company are, together with Groupe Barrière and channel R7, main sponsors of the American Film Festival.  As luck would have it my one evening processing along the red carpet was extremely important. The 1,700-person auditorium watched That Changes Everything, started long before #meToo, showing documented discrimination in the movie industry. Meryl Streep was among the big names showing how difficult it has been for women to get behind, rather than in front of, the cameras, and the film’s Executive Producer, Geena Davis, was honoured as main name of the week.  I do not know what happened to her afterwards – presumably she was wined and dined in suitable French style.  I was whisked off for a memorable sole diner-à-deux with Alexandre Desseigne-Barrière in an already-closed restaurant empty but for a platoon of waiters only too willing to serve their big boss. 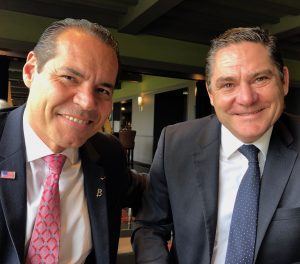 Most of my stay I was admirably entertained by the complex’s COO, Jérôme Limoges, and the Director of Sales & Marketing, Eric Fouquet.  One day we lunched up at the Golf Club, next to its futuristic training academy.  One of Barrière’s three Deauville hotels, the 171-room Hôtel du Golf Barrière, is up here, and very attractive it is, slightly less edgy than its siblings (though I loved the full-size Mooi horse sculpture in the lobby).  This hotel closes all winter long. Then back down we drove, past one of the two racetracks for which Deauville is famous, and past a couple of stud farms – which is the one where Sheikh Mohamed keeps some horses (when he flies in from Dubai he stays in his own house here)?  I had the good luck to stay in both the other Barrière hotels. At the 247-room Hôtel Royal I loved the simplicity of room 512’s décor, pale  blue walls with a half-tester fabric bed canopy, and marvellous beach and sea views through easy-open windows – I also liked the countryside views from the seventh floor gym. 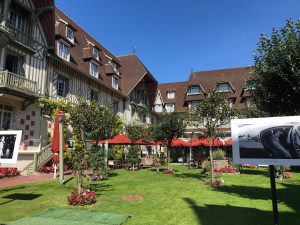 Hôtel Royal ostensibly also closes for the winter but re-opens for the festive season, and for any special events.  The 271-room Hôtel Normandy, by contrast, keeps open all round.  This is the luxury hotel for those who prefer bedroom walls entirely covered in pictorial fabric, and views that may well look down at charming lawns dotted with trees (apples, of course).  The bar is hive of activity, every night – see a video of the making of 45, specially concocted for this, the 45th film festival. And of course at any time of year there is the famous Casino, two minutes’ walk from either the Normandy or the Royal: sadly I was not allowed in as I did not have my passport with me.  What are the other highlights of Deauville? Well, the fabulous miles-long sandy beach and bracing air encourage a lot of regular weekend business from Paris. To see how easy the journey is, I left these luxury hotels, was at the rail station in seven minutes and within two hours I was back at Gare St-Lazare. SEE VIDEOS OF HOTEL NORMANDY BARRIERE (ROOM 203), HOTEL ROYAL BARRIERE (ROOM 512) AND THE MAKING OF COCKTAIL 45