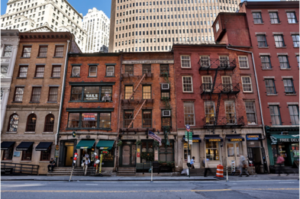 One of the world’s top luxury hotels, Claridge’s, in London’s Mayfair, hosts The Dead Rabbit as a pop-up in its own bar, August 15-22, 2017. The New York original, in an 1828 building – above and left – was voted No 1 on the World’s Best Bars 2016, and Irishmen Sean Muldoon and Jack McGarry call it ‘an Irish bar for the 21st Century’. Awards flood in, for such accolades as the World’s Best Cocktail Menu’ at the prestigious bartenders festival the ‘Tales of the Cocktail’ in 2015, making it a place of pilgrimage for cocktails lovers from around the world.

The bar is named after a notorious Irish street gang that controlled much of Lower Manhattan during the mid-19th century, with the story of gang leader John Morrissey told through its graphic comic style cocktail menu.

The Dead Rabbit pop-up at Claridge’s will recreate the second floor ‘Parlor’ (cocktail cathedral), serving many of their innovative  signature cocktails including their renowned Irish Coffee and the contemporary classic Psycho Killer plus such specialities from their food menu as Lobster devilled eggs, Cumberland sausage rolls and The Irish lamb stew. Essential atmospheric elements of The Dead Rabbit from the ragtime piano playing, the welcome drink, comic book cocktail menu and New York style service.