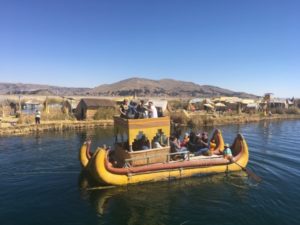 Few luxury hotels could expect guests to emerge, outside in the dark, to watch the sunrise but this is part of the agenda on the three-day Belmond Andean Explorer. The train had jolted to a sudden stop at 1.30 a.m. – yes, it woke the gal – and raising the cabin blinds four hours later it was possible just to make out shadowy figures walking past the train, all heading to the right. There, 200 yards away, was the Peruvian shore of Lake Titicaca, and as we watched the sun came up, in the horizon shown above. Being Belmond, hot cups of coffee were passed round, and hardly any of the 40 experience-seekers who were travelling on the train raised voices, says the gal, as if in awe of the magic unveiling of the dawn scene. Yes, it was cold, and Moncler and North Face were augmented by alpaca blankets from the train: here at over 10,000 feet above sea level several had five minute gulps of the train’s oxygen. 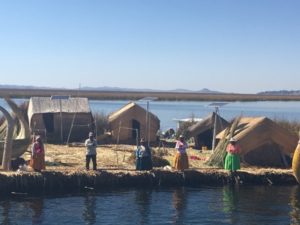 Floating island, made of reeds

I made my way back to the train and was first in to breakfast, at six sharp. Bliss, this is a proper à la carte meal. Carolina immediately brought excellent coffee and water, and a basket of warm breads, including two types of croissants. I had a half-pint of drinking yoghurt, two eggs sunny side up with mushrooms, and healthy wholegrain toast, and read the New York Times courtesy the local Movistar. Today we were having a whole day trip, on Lake Titicaca. First, on a modern speedboat through the reeds to the famous Uros floating islands, literally formed of reeds, and regularly boosted with fresh layers of green reeds put on top. Dotted among the residents’ reed houses are solar panels on stalks – yes, they have power, and internet. They get around, from one island to another, and to the mainland for shopping, and school for their kids, in extraordinary row-boats made, naturally, of reeds. It really was amusing to see some of the women, in day-glo dirndl skirts and ubiquitous felt hats, rowing as if they were in the Olympics. 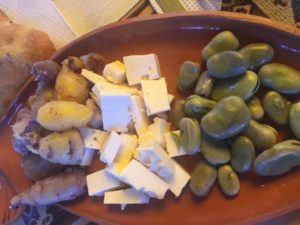 Their diet is baby fish, carachi, and dozens of different types of potatoes, and it shows as their girth is delightfully roly-poly, complemented by moon-shaped smiles. They waved us off, and we went on to a static island, Taquile, where at a proper restaurant half-way up an otherwise deserted hillside our lunch started with snacks of fava beans, cow cheese, and potatoes (and went on to quinua vegetable soup, grilled salmon trout and rice, and bananas and oranges). You never go hungry on a Belmond Andean Explorer trip, by the way. Back onboard, any time you want, 24/7, there are any drinks you can think of: the displayed bottles include Bombay Sapphire and Tanqueray, and I was told by my new Boston and Canadian friends they make a neat gin and tonic and gin martini: I did not see big takeup for Glenfiddich or Johnny Walker Black or Red, or even Pisco sours. 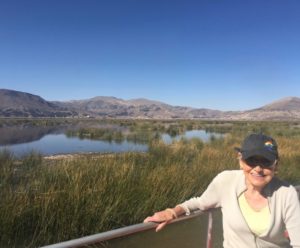 Our speedboat returned through the reeds

Among the wines poured with set dinners were two Miguel Torres labels, Reserva Las Mulas Sauvignon Blanc 2016 and a Reserva Santa Digna Cabernet Sauvignon 2014, but if you wanted anything else, you could always buy up from the pay-extra list, say Cloudy Bay Sauvignon Blanc at $166, or Two Hands Bella’s Garden Shiraz at $284, no vintages listed. Really, as with any true luxury hotel, nothing is too much trouble for this team. The two restaurant cars have permanently-fixed tables for four one side of the aisle, and for two the other, with the one exception of a table for 12 set longside on, and permanently reserved for some of the Mexican party. One night we wanted a table for five. No problem, engineers came, clambered under a table for two to take it down so that our fifth companion could sit at the end of the adjacent table-for-four, thus allowing Carolina and her team of servers to navigate around where that table-for-two had been. NOW SEE A VIDEO OF THIS MORNING