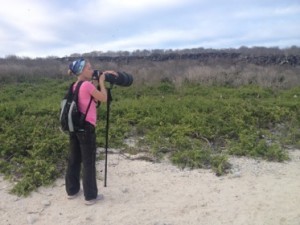 By now, day three on the unique Silver Galapagos floating luxury hotel that never ties up at a dock, everyone knows the drill, and interprets the daily routine individually. For most, it is eschewing the elevator and take the stairs to breakfast (total 64 from deck six, where the four top, and premium, suites are, oh so handy for the adjacent LifeFitness gym, and the spa, and the outside sun loungers and the really hot hot tub). The gal is already addicted to the peach-flavoured drinking yoghurt, and the always-consistent scrambled egg, made with olive oil. Maria from Ukraine carries bigger and bigger lenses as we make our way ashore, today to North Seymour island off Santa Cruz. 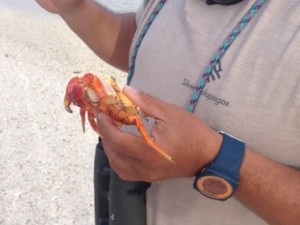 Although we are on the Equator, the water is chilly, thanks to the Humboldt Current – 72 degrees F most of the year. We study crabs, most grapsus grapsus, known as Sally Lightfoot. We look at an empty shell, about four inches across. Ernesto explains ecdysis, the moulting process. When it is ready to go, a crab simply exits its carapace, pulling out all its four pairs of broad walking legs – as if an eight-fingered person was taking off a tight glove. It leaves all that behind and temporarily becomes a soft-shelled crab until it grows another, bigger, shell. Crabs are vegetarian, or sort of, though they favour parasites, and the algae that grow on iguana – of which more later – are highly prized. 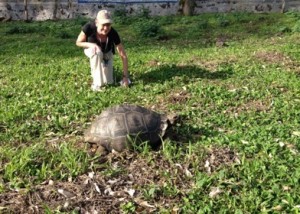 Shall we have a race?

Time for more shells, those of tortoises, which gave their name to the Galapagos’ first moniker, Insulae do los Galopegos. We are bussed to Santa Cruz’s Manzanillo Ecological Reserve, to see giant tortoises that, for me, bring back memories of visits to the Seychelles, to North Island and, more recently, Oetker Collection’s lovely Fregate Island Private, where a tortoise was so attached to the landing strip that a crane was required to move him. Apparently Charles Darwin, on his famous HMS Beagle voyage 1831-1836, the one that started his revolutionary theories of evolution, took three tortoises on with him, Tom, Dick and Harry. Only the last survived, but after being shipped to Australia (for the climate) it was found to be female and renamed Harriet. Surviving for 170 years she outlived generations of homo sapiens around her. 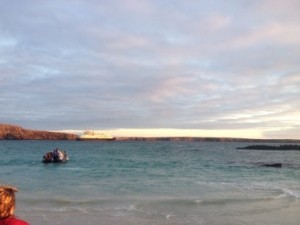 The ship’s library, by the way, has an outstanding array of books on Galapagos, other science, and Darwin as well as a collection of good fiction left behind by previous, polysyllabic guests. I just manage to finish Darwin: The Life of a Tormented Evolutionist, by Adrian Desmond and James Moore, 1991, by the end of the voyage, thanks to several spells reading as I pedal the lie-back bike. Today, as always, we return to the ship by zodiac, knowing that most of us will be spruced up and ready for pre-dinner cocktails in the Piano Bar. (Is it true we are running out of the excellent Ecuadorian Club Premium Negra beer? If so this is one challenge that a typical luxury hotel seldom has!)