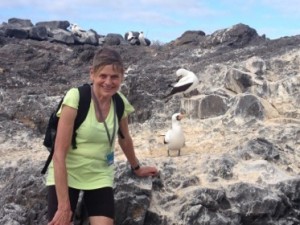 It is difficult to say which is the highlight of a seven-night voyage on Silver Galapagos, the floating luxury hotel where you lap up knowledge, luxury, nature and networking in that alphabetical order. The gal’s daily routine starts with Breakfast tea brought by butler Enrico (no morning coat, fortunately, though he wears formal black vest and tie) and a good work out in one of the world’s best gyms-with-a-view. The networking means that she can borrow an iPhone charger to replace the ridiculous Apple cord that seems to split all too often – thank you purser Carlos, and new friends from south-west England and Boston (‘half English’) for sharing your gear.

A sealion feeds her pup

This means that this morning, on the young – 3.5 million year old – Española Island, guide Gaby, who runs a 60-person guesthouse back on the mainland during her third-of-the-time off (her husband is in charge, otherwise), can take a photo, with my iPhone, of yet more boobies. How many have I seen? But how many sealions have I seen? Never enough. There is something so intrinsically delightful about watching males slithering and lurching up really high cliffs, to get from sea level to somewhere flat where they can lie and snooze. We spend ages watching females down at a water’s edge kindergarten, nursing and playing with their youngsters. 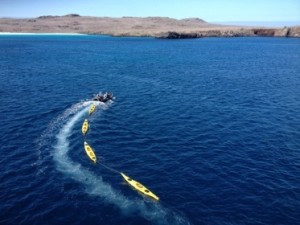 A string of kayaks awaits

It was today that we saw tens of thousands of Christmas iguanas, striped red and green, constantly spitting out salty slush from the seawater they have been ingesting while eating algae. For others, highlights of the week have been great snorkel trips, either from a beach or deepwater, off the zodiacs. And kayaking has been so popular that sometimes double-trips have been scheduled. Travelling on Silver Galapagos is not for the faint-hearted, although presumably you could simply spend all your time onboard, merely lapping up knowledge through distant scenery, listening to others’ accounts and watching their videos, and also attending the excellent seven p.m. recount of what happened today, and what will happen tomorrow. 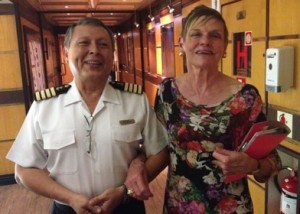 Tonight is the final formal dinner, except that is not formal – some guests never wear a jacket the entire time and every woman’s hair is constantly a mess. But tonight the officers host tables, and I am honoured to be on the right hand of Captain Marcelo Rojas, who shares stories of his life but not of storms, for the simple reason that they simply do not happen here in Galapagos. Some go for a postprandial salsa which continues to the small hours but, as in any luxury hotel, I am keen to get to bed as soon as possible.