Our last full day on Silver Galapagos, a ‘luxury hotel that floats’ and feels so like home the gal can hardly bear to leave. But another day starts. Two of the ship’s 78-strong crew are cleaning the jacuzzi – there are 112 in all, but since they work six weeks on, three weeks off, there are always only two-thirds on board. The butlers work in tandem with a male helper, so it takes minimal time for a twice-daily re-do of Suite 604 (361 sq ft, with a 74 sq ft private teak balcony). At night local Pacari Ecuadorian organic chocolates were laid on the bed, which of course has Rivolta Carmignani Italian linens. The gal had an Illy Caffè espresso machine and Nativa Ecuador toiletries. There were plenty of sockets (110 voltage). Naturally you pay for WiFi but, unlike most ships, it never lost satellite connection. 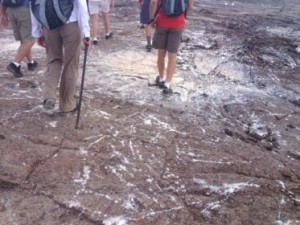 After all this, one dreams of the spa

Yes, I do like 604 – or any of the four sixth deck suites – because of the proximity to the gym. Most times it is just me, looking out through the all-wall windows at the unique and constantly changing Galapagos scenery. 604 is also handy for the spa, which is thoroughly to be recommended. Spa specialist Alicia was trained in Quito, and in Korea and the USA, and she uses Ecuadorean essential oils, from Cuenca (an Ecuadorean city that is apparently a popular retirement place for snowbirds from the northern USA and Canada – perhaps they are enticed by those oils). She works specially hard on the feet, as if to ease away the sores from walking and bird-watching and the like.

Actually even our last full day was – busy. Today was Santa Cruz. In the morning some went to Estación Charles Darwin, partly funded by European hedge funder Swen Lorenz, while others chose to be bussed up to a working farm, El Trapiche, an old sugar cane mill that makes a unique moonshine liquor. Others walked the streets of Galapagos’ biggest town, Puerto Ayora – population 9,208 – and I discovered a real land-based hotel, Grand Hotel Lobo de Mar, which unusually had its outdoor swimming pool in the open-air main lobby (The Chedi Andermatt’s indoor pool is part of its lobby, but it is enclosed). Then it was back home, to the Grill for a final ceviche followed by Galapagos lobster, enlivened by the electronic organ and taped local background by the talented Alfredo. 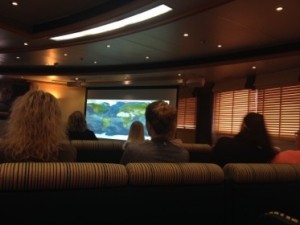 The versatile Claudia Holgate, who is very involved with the International Association of Antarctic Travel Operators, IAATO, based in Newport RI, talked on climate change today. Do not call it global warming, she said, firmly. Climate change means some areas will get hotter, some colder, some wetter, some drier. We can expect increased duration, frequency and intensity of climatic events. In Galapagos this will probably mean more rain and the sealevel may rise about 90 centimetres. Migration patterns will change, resulting in loss of biodiversity. After this it was necessary to recover, with glasses of the luxury hotel (sorry, ship) sparkling, a highly drinkable Chandon from Argentina, as the Captain brought out representatives of everyone from kitchen to zodiac guys, and then, the final supper itself, with Postales Del Fin dl Mundo Malbec 2012.