Day four on this idyllic luxury Silver Galapagos finds the ‘floating hotel’ anchored off Rabida, which means we have the choice of taking a tour by zodiac or kayaking or walking along the shore and seeing an inland lagoon, which until late 1997 had lots of pink flamingos. Then floods caused by El Niño meant their shrimp diet disappeared Many walkers this morning take photos of just a few of the 50,000 Galapagos sealions, lobo marino, about 7.5 feet long when adult. People have, says the gal, already taken more than a lifetime’s bank of photos, of everything… Claudia Holgate, the South African guest lecturer who specialises in climate change, waits for shots of Great Frigatebirds (3.3 feet high, 7.5 feet wingspan) and Magnificent Frigatebirds (3.7 feet high, 7.0 feet wingspan). 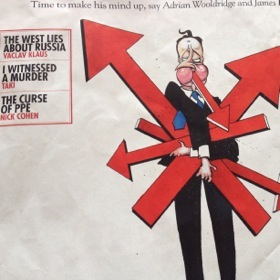 The males of both species are among the world’s most extraordinary. When they feel the urge, they inhale air into huge scarlet sacs under their beaks, hoping to attract white-chested females, flying above, to come down and get into courtship mode.   As it happens, I am reading an old copy of The Spectator, September 27th, 2014, and looking at artist Morten Morland’s cover – the UK’s flustered Prime Minister D. Cameron getting upset about something or other to such a degree that, just like a male Frigatebird, he is puffed up. The real frigates, called a lek when in the plural, are a continuous source of entertainment, both on the ground and in the air, when they are instantly recognisable by their long swallowtails. 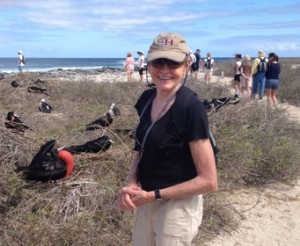 But there are so many birds to see. Later we are to encounter Galapagos Hawks (1.8 feet high, and 3.9 feet wingspan), and we watch a BBC/National Geographic documentary that shows one waiting, seemingly forever, before pouncing on an iguana just as it comes out of its tiny crack-in-the-stone of a home, and carrying it away, leaving baby iguanas as orphans. You quickly realise, here in Galapagos, that nature is inherently cruel and there is nothing that we humans can do about it. Some, by the way, are lucky enough to see tiny Vermilion flycatchers (about five inches) but we all see yellow-beaked Galapagos Albatross (3.0 feet high, 7.9 feet wingspan). Albatrosses can live to about 45 years: they are monogamous for life, doing extraordinary courting dances, but not mating the first year, and when eventually a single egg is laid both parents take it in turns, sometimes for two weeks at a time, to help incubation, while the other forages up to 2,000 miles. 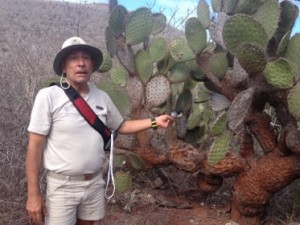 Juan Carlos describes prickly pear, a great feast for iguana, which means that you never see baby prickly pear. When eventually a mature tree dies, iguana gather from far and wide for what is a mammoth feast. Do they practise compulsive eating? No, they know when they have had enough. Iguana also shrink when they are starved, body mass and bones, too, but when food arrives their bones rebuild – NASA is studying this, to overcome astronauts’ osteoporosis. Another thing about iguana is that the males masturbate against rocks before copulating. Could land-based luxury hotels teach such fascinating facts of life.