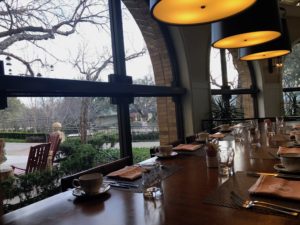 A hundred years ago, or less, much less, Las Colinas was one big Carpenter-owned farm in the middle of Texas. Then, at some point in the 1980s Ben Carpenter started talking with Georg Rafael about developing a resort, perhaps along the lines of Rafael’s Turnberry Isles north of Miami. And then, as so often happens in the ever-changing world of luxury hotels, Georg Rafael went on to pastures new and Four Seasons Resort and Club Dallas at Las Colinas opened in 1986. It has continued to evolve, says the gal. Look out of the picture windows of LAW (Land – Air – Water, categories of its menu items) at just one of the golf fairways. 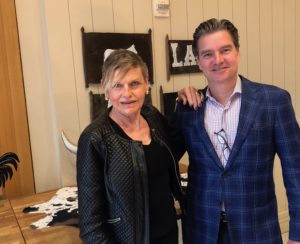 Dirk Burghartz, Düsseldorf-born GM, and RVP of a whole swatch of Four Seasons, actually started his career in the kitchens of his home city’s Breidenbacherhof, then Rafael, now Capella.  Here he is king of a massive empire. 400 acres of land, a sprawling nine-floor hotel with 431 rooms, and 720 employees who also run a truly magnificent sports club (750 family memberships which means anything up to 6,000 have access to it) and two 18-hole golf courses, Jay Morrish and Robert Trent Jones.  Add indoor and outdoor tennis and rackets, and a gigantic gym – so large it has a circuit hike course above it, peripherally at mezzanine level. And there are weddings, at least 40 a year, plus other events: on March 22nd, for instance, the hotel, working with Northpark Center retail, hosted a fashion lunch in aid of Cure Four All Seasons cancer, emceed by ABC News’ Adrienne Bankert. 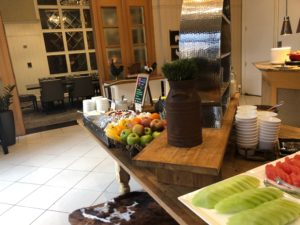 I do think the hotel’s food is clever, by the way.  It is just right for today, and for Texas. What was originally Café on the Green became a bit characterless. Without radical changes to the two-tier fan-shaped space other than putting in different heights of table and investing in casual ceramics (Steelite) and Chiliwich mats, LAW was unveiled. This is 21st-century comfort food, say roasted beer-can Livestock First Ranch chicken – cooked with duck fat and beer rather than in a can – with a side of crispy brussels, perfect with Trefethen 2016 Merlot Oak Knoll.  And at breakfast the $29 buffet is amazing value.  No nickel and dime-ing in the Burghartz business plan (even the bottled water, produced at the hotel, is free). 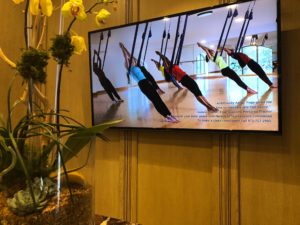 Screen by check-in or -out

It appears much of the hotel is in for a new look. Some others might agree with me in not liking the fact that room 783’s windows are half-covered by white wood blinds that obscure the view but do not cut out the light. The lobby will be re-imagined to bring it up to date. But there is already so much about this luxury hotel to make guests return – at weekends, a notable number of millennials will drive up to three hours for R&R in this urban resort. They love local restaurants, neghbouring retail, and Live Nation’s entertainment at the Toyota Music Factory, ten minutes away. They, like me, smile at the graffiti, by then-employee Moises Castruita, lining the 100m tunnel to that amazing gym. And, finally, what a clever idea to have a promotional hotel video by front desk, visible as you check in and check out. AND HERE ARE VIDEOS OF ROOM 783, AND THE CORRIDOR TO THE SPORTS CLUB