Flanked by a pair of managerial bikers outside Fairmont Washington DC

It was obviously going to be a high-octane day. Wake up, gal, here at Fairmont Washington DC.  The guys are waiting, or at least two of them are. Big, healthy, super-active types with bikes, racing variety.

Another one, a bullet of a biker with backpack as if we were going for the day, turns up.  Off we set, them on their racers, your correspondent on BMW’s take on a mountain bike.

There are fantastic bike rides from this hotel (which, at M and 24th Streets, is only a stone’s throw from Georgetown and should be called that since a hotel a few yards further east tacks ‘Georgetown’ on to its name).

On the southern shore of the Potomac River

We head off, racing south down 23rd Street at breakneck speed.  The cherry blossom is divine, and fortunately there is not much traffic at this hour. Recommended bike rides include the Rock Creek Park Trail, to the U.S. Naval Observatory or what we do… 23rd Street takes us to the Lincoln Memorial.  We spin around it, going past the Vietnam Veterans Memorial, and then over the Arlington Memorial Bridge – with Arlington Cemetery and the Custis-Lee Mansion on the hilltop beyond.

Over the Potomac River, we turn left along the winding paths near the George Washington Memorial Parkway, through Lady Bird Johnson Park.  The sun shines, and the daffodils give a blaze of yellow. 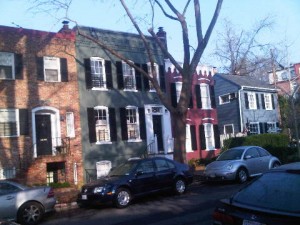 There are lots of families out striding, and baby boomers from all over the country come to see the cherry blossom (wonder where my blogging pal Donna Hull of myitchytravelfeet.com is right now?  Last thing I heard she was revelling in the luxury hotel experience of Four Seasons Sydney).

Fairmont Washington DC, by the way, started life as Westin, became ANA, became Monarch and acquired its definitive luxury status when it became Fairmont in 2002.  It is an L shaped building with a fabulous central garden (so beautifully lit at night).  They do two weddings here on many Saturdays..

This is a hotel that communes with nature.  Being Fairmont all 415 rooms have blue bins for paper recycling (until recently they had a suite themed for Lexus, room 954, with whole bits of trees as decorative columns and recycled curtains and like, but now Fairmont partners with BMW – perhaps, like the St Regis New York Bentley suite, they will do a BMW suite?).

More on sustainability: in June 2010 the hotel signed with Renewable Choice Energy to offset 100 percent of its electricity, with renewable energy credits generated by wind farms across the USA, which has the impact of planting 42,982 mature trees.

Nothing like a bit of beef to beef up the energy levels...

And on the ten-floor hotel’s rooftop live hundreds of thousands of bees specially brought in from Italy.  Boy does the hotel make use of all that output.  It is honey this and honey that, which certainly gives lots of energy to those planning on a Serious Bike Ride tomorrow.

Dining in Juniper gave a chance to try Ian Bens’ cooking – lovely guy, from Calgary AL, and incredibly enthusiastic not only about basic dishes but lifestyle cuisine with offerings that fit into gluten-free, macrobiotic and other categories.

But in readiness for the ride, it seemed better to stay high-energy, namely Pennsylvania greens with a honey dressing, and a striploin from Pineland Farms.

This is a company that started in Maine, which does not seem to bode well for ‘food miles’, eating close to home, so to speak, but on further investigation Pineland Farms is just that, a consortium of farms, so perhaps my steak came from really close to home, say Maryland or Virginia (doubt if there is any beef in District of Columbia, unless Mrs Obama has the odd Hereford in her White House garden).

Breakfast fruits - with honey from the rooftop bees

Ignoring the food miles, or at least the beverage miles, the sommelier chose Four Graces Pinot from the Black family’s Willamette Valley vineyard in Oregon.

Of course we could have chosen something from nearer at hand, say Donald Trump’s Virginia winery in Charlottesville. Kluge Estate Winery and Vineyard was started by 1980s society queen Patricia Kluge, ex-wife of John Kluge (on $1.6 million weekly alimony, they say).

She lost her shirt, and The Donald bought it at auction spring 2011.  Yes, seriously.  He will undoubtedly be trying to buy Famous Grouse or other Scotch whiskies once his Aberdeenshire project gets nearer completion.

Honey provides the signature Juniper dessert, with honey cake and bee pollen icecream.   In the morning there is honey, too, to go with fresh berries.  I take a last look at Georgetown, the gorgeous area to the west of the Fairmont.  No time for more, but I will be back to pedal lots more, as long as I have my escorts.