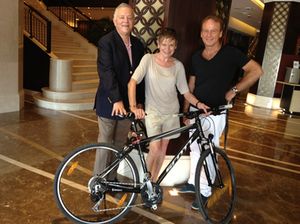 For a keen cyclist, a good luxury hotel needs a suitable bike.  I first came across Scott bikes when staying at InterContinental Resort Berchtesgaden, 120 miles from Munich, and 700 metres above sea level with marvellously clear air (Berchtesgaden, which produces lovely tastly yoghurt, is birthplace of the Talise nutritonalist the gal wrote about a couple of days ago).  Now here, in Abu Dhabi, I am put on a brand new Scott bike at Hilton Abu Dhabi and off I pedal, along the Corniche. 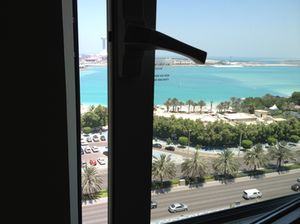 They are commendably health-aware at this cosy-comfortble resort which is so popular that 20 percent of people staying here come back again and again.  Some of them, says the big-boss Wolfgang Maier, who funnily enough also thinks of himself as a Munich Man, return not only for the people who make it all happen but because this is the only hotel in Abu Dhabi where all rooms have windows that open.  What a treat this is. 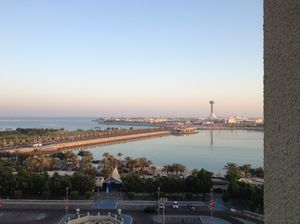 From the top floor, in room 1002, I can look across the water, blessedly free of jet-skis (I think they are banned here) at what is called Marina Mall, an island reached by a long causeway bridge.  I had been given a jogging map, total 13 miles (ha ha!) that would take me along the Corniche, which has a cycle track, and back again and over to Marina Mall and along to the big mosque at the end of it.  I did not go quite that far.  Having dropped my loaned bike off with the concierge, I was back up on the tenth floor when another guest, obviously a regular, came out of his room in Bradley Wiggins type gear, with a hundred-speed bike, all the works. 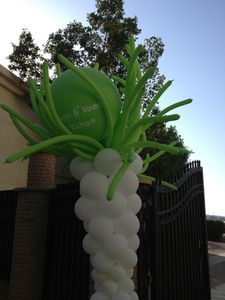 Welcome to the party

No fewer than 1,500 locals are members of the hotel’s private beach club, which is packed every day.  There are pools, and lounging areas, and squash, and tennis and a big gym.  You reach the beach club either directly from the road or via an underground walkway from the hotel.  Later, I walked across just as a little girl’s sixth birthday party was about to start.  I went into the gym and watched arrivals walk past the window.  Some of the invitees were wearing the ultimate Little Princess frocks, and carrying their own gifts for the birthday girl.  Others got the maids to carry them (gifts, not Little Princesses). Mothers were dressed in anything from blue jeans to the latest Versace.  Presumably there was a gigantic cake. 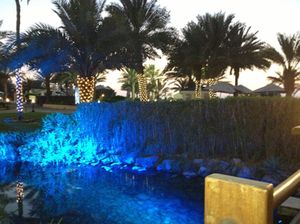 Outside, at Vasco terrace

I too ate splendidly at the beach club, at the outside terrace of Vasco, Mediterranean plus seafood plus steak, whatever you like.  Joseph, the manager in charge, knew exactly what we wanted – the salad bar and a great piece of Aussie beef and a glass of Pinot.  I loved the way the water features around the Vasco terrace change day-glo colours as the night progresses. 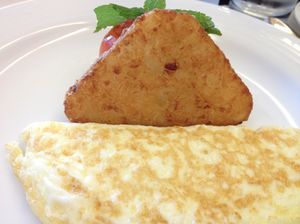 A breakfast request, in three minutes

This is a luxury hotel for those who prefer their favourite, rather than their newest, pair of shoes, and for those for whom the words Cosy and Comfortable are key.  In the tenth floor Club Lounge, I could not see a chef but I asked for an egg white omelette.  It came in three minutes, cooked just out of sight by a real chef… I asked if by any chance they had a Financial Times.  That took four minutes.