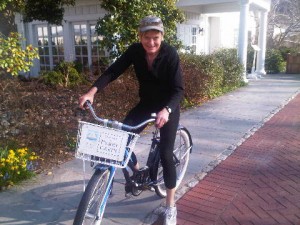 About to cycle, Inn at Perry Cabin

The gal takes a train, Washington DC  ‘to Baltimore’. Unfortunately there is a miscommunication. Baltimore means Baltimore but somewhere along the line it is interpreted as Baltimore BWI airport.  Driver is there. The would-be-driven is not there. Frantic phone calls, via England, sort it all out.

An incredibly alert young lady on the front desk of The Inn At Perry Cabin in St Michaels MD calls me to say the driver is coming, he will be 30 minutes.  After 20 minutes, while I am sitting on a long, tall-backed, wooden bench, writin’away as if there is no tomorrow, a guy walks past with my name on a paper.

Nearly two hours later we purr into the Chesapeake Bay area – at least I think that is where I am but map-less, man-less, it is all a bit of hit and miss.

I am shown to my room at what is currently Orient-Express’ only hotel in the USA but frankly after such a journey exercise is needed.  Great, they have bikes!  Pop on one, a blue Swiss number by Schwinn.

Unlike most simple-technology, back-pedal-for-brake city bikes, this one has three gears.  It also has a metal basket on front, prominently named (Inn At Perry Cabin).  This will be a flat ride. It is one hundred yards along a red brick path to the main highway, Watkins Lane.

Turn right, cut-down pasture on right.  Turn first right, signed posted to Miles River Yacht Club.  Rural countryside, far from the noise and bustle of Washington DC the last few days.  One of the telephone poles has a stork nest on top.

Back the way I came, past the Inn, on my left, and on. Immediately after the Inn is Chesapeake Bay Maritime Museum. Super, its brochure has a map. St Michaels is on Rte 33, which leads west from Rt 50.

The Museum spreads over 18 acres, has won all kind of awards, and special local events include an antique and classic boat festival every June, a boat auction in August or September and an oysterfest in November.

I am then in St Michaels township, where the little side streets lead down to Miles River and its boats.

Head along the main street, its single super market, lots of bars and Beds & Breakfasts, poster stores and a year-round Christmas Shop (do its proprietors go on holiday on December 26th or stay open and sell off cheap?).

The overall design is a clone of Nantucket, or parts of the Maine south to Rhode Island coast, all out of season.  Two prominent churches face each other determinedly across main street. Some house owners have been a bit too assertive in their choice of paint colour.

There is no paint colour at The Inn at Perry Cabin – it is white-white-white, which goes so beautifully with nature.  I cycle around the sprawl of its buildings, all connected at ground level.  Some are two floor-buildings, some are three-floor, all are white board, with grey tiled roofs.

The greenhouse at Inn at Perry Cabin

By cycling around the entirety (in all, 78 bedrooms, plus meeting rooms and a big restaurant and a pub) I get to the Linden Spa, detached from the main complex. Behind this is a greenhouse, white of course. Some bold pansies adorn its outside ledge.

Purser Samuel Hambleton, who had fought in the war of 1812 and become an aide-de-camp to Commodore Oliver Perry – he who said ‘we have met the enemy, and they are ours’ – built a little inn here in 1816.

He modeled it after Perry’s cabin aboard the USS Niagara, hence its name.  It was a private home, then expanded into a farm.  In 1980 a local family, the Myerhoffs, opened it as a six-bedroom hotel.

Designer Laura Ashley’s husband, Sir Bernard Ashley, bought it, and used the proceeds from all those yards and metres of distinctive floral fabric to expand it into a 41-room luxury hotel. (He also bought Keswick Hall outside Charlottesville VA – the gal has just learned that that particular establishment is now working closely with Donald Trump’s winery, only eleven miles away.)

A welcome (non-alcoholic) martini, to begin a stay at Inn at Perry Cabin

In the last year of the last century Orient-Express bought both Keswick Hall – and The Inn at Perry Cabin, and by 2008 they had invested enough to be able to take the inn up to its present size.

Orient-Express has sold Keswick, which means they have enough to continue investing.  2012 upgrades include a redo of meeting rooms, a new outside jacuzzi and croquet court and perhaps tennis courts.  A whole range of resort offerings will be unveiled the last week of April.

There will be kayaking and extreme kayaking, with ‘functions’ to perform at set buoys, and sailing for boys and girls, whose moms can go shopping in the spa’s admirably well-chosen boutique, or in town.  Come to think of it, why not buy your decorations, now, in St Michaels Christmas Shop?