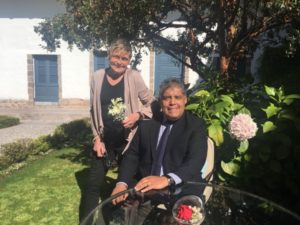 Arturo Schwarz at the Palacio

Arturo Schwarz is a Lima-born professional who heads not one but two luxury hotels – Belmond’s pair in Cusco. He has great charm and, says the gal, one of the first things he said was that he creates magic. He then invited the guest who had just checked into one of his hotels, Belmond Palacio Nazarenas, to have a cocktail on the corner terrace, all of three square yards of it, overlooking Plaza Nazarenas (this is the terrace used in the 16th century by the then Mother of the Convent which was here, one Doña Maria Calderón, who was killed on the order of the so-called Demon of the Andes, Francisco de Carvajal, who then had her corpse hung from this very terrace). 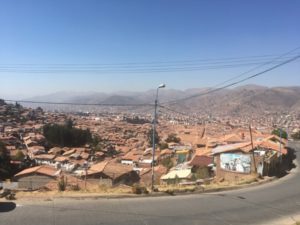 Looking down at Cusco

To happier things. To get exercise in Cusco there are endless steep roads but you have to take them slowly. My exercise, twice a day, is up the steps and inclines of Pumacurco road, to the very top, to Sacsayhuamán ruins (you never forget the name of that particular historic venue – just say “sexy woman’). Up there, I look back down at the town of Cusco, and then retrace my steps. Fortunately Belmond Palacio Nazarenas has a very nice outdoor pool, really deep and really really hot. There is nothing nicer than a good swim looking around at the mountains and, closer to hand, the hotel, formed from what was the early 16th century home of Conquistador Mancio Serra de Leguizamo. 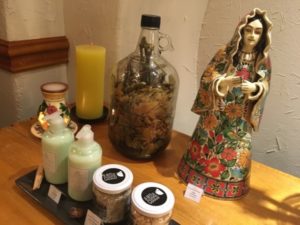 And then I headed for the spa. This is sensational, really world-class! There are five rooms, some of them with glass floor panels lit from below to reveal mediaeval ruins: not surprisingly they do big business with weary bodies returning from such other ruins as Machu Picchu, but even walking the steep streets of Cusco at an altitude of well over 11,000 feet ASL is tiring, and some do not sleep well at night (the answer is to stay here, at Belmond Palacio Nazarenas, where all rooms are oxygenated). To see what corner room 200, the one that belonged to the ill-fated Doña, looks like today see the video below – this is top quality, from painted ceiling to satin-covered coat hangers to herb-filled soap guillotined to your command. 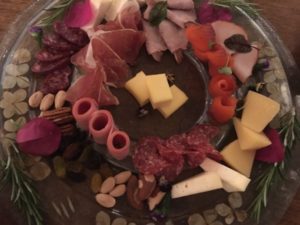 After the spa I followed Arturo Schwarz’s advice and took a hotel-logo glass of superb 2008 Bramare Viña Cobos Malbec Marchiori Vineyard out on the corner terrace (of course the roses had to come too). I looked down at the night-time crowd, and retreated to the warmth of my room to enjoy the superb plate of Peruvian charcuterie that had been a welcome gift. Some of the same charcuterie appeared at the following morning’s breakfast buffet, together with a thoughtful spread of mango and such local delights as an Emoliente. No, I did not try it – it is boiled barley, horsetail plant, linseed and other delectables fortunately sieved and served hot with honey or sugar. There is a limit to how much I will try, even when it comes with such a recommendation as this luxury hotel. This is, by the way, THE top hotel in town: I checked prices this very morning and, working in Peruvian soles, Palacio del Inka offers 661, J.W. Marriott 1,009, Belmond Monasterio (which has some rather bijou rooms) 1,323 and here, Belmond Palacio Nazarenas, 1,928, and worth every sol. And I have not even mentioned my superb butler, one of the best in the profession.