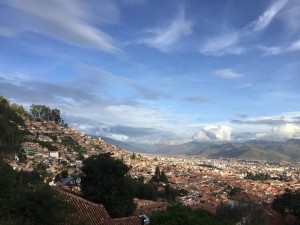 Looking down at the city

As the gal has already said, those with any sense fly into Cusco but then acclimatise by spending at least one night, preferably three, at the lower levels of the Sacred Valley. Cusco is tough, really tough, for the first couple of days and nights. It is 11,207 feet above sea level, which means almost 40 percent less oxygen, and you feel it. Even the fittest person has difficulty running up the city’s steep roads. I suggest waiting a day or two before taking on the 293 steps up the Serpent Slope from Plaza Nazarenas to the Sacsayhuaman – easy to remember, ‘sexy woman’ – ruins. 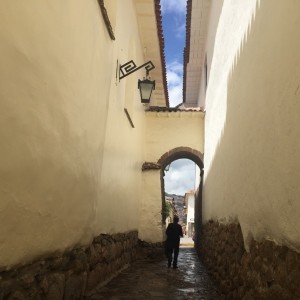 Some Cusco streets are very narrow

So what do you do to counteract soroche, altitude sickness? Everyone recommends herb tea, particularly the local-mint Menta & Muña, or the more well-known Made de Coca (look for Del Valle brand). All luxury hotels have 24/7 hot water urns and sachets, or already-made drinks, in their lobbies – but be warned that water here boils at 84 degrees C. Coca, by the way, is any of four cultivated Erythroxylaceae plants found throughout Argentina, Bolivia, Colombia and Ecuador as well as Peru. Some people chew dried leaves, whole. Made into tea it smells like worn socks, which is one reason why I, and many others, prefer the Menta & Muña tea. Another thing ladies, put any tubes of makeup in the minibar, to prevent their contents oozing out all over everything when you try to get just the tiniest blob out. 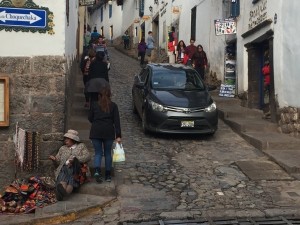 My minder, Walter Rodriguez, had other tips for beating altitude sickness. Eat lightly for the first day, drink masses, not only of those teas but also water, and if, like me, you wake up in the night unable to breathe, open the window and take a few deep breaths of real, outside, air. Walter Rodriquez, a local man who majored in psychology, heads the Cusco branch of Journeys in Peru, based in Belmond Monasterio del Cusco. He was absolutely excellent throughout, and believe it or not he speaks fluent Japanese as he ran an English-language school just south of Osaka (there are many Japanese integrated into Peruvian society, descendants of farmers who came here for a better life in the first decade of the 20th century). He told me, incidentally, that Japanese sounds a little like the local language, Quechua. He also said that Cusco is planning another airport to supplement the existing small runway that can just about cope with the 35 flights a day to Lima. More capacity is badly needed, but the new airport will be at least 45 minutes’ drive from town, and although it will be able to attract bigger planes, and international arrivals, this is a double-edged sword. Why fly in direct when, as now, you can enjoy Lima on your way here? And do Cusco and Machu Picchu really need more tourists? 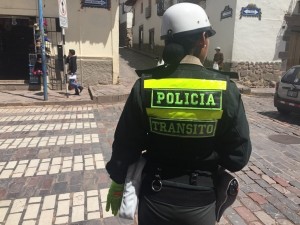 Even at low times, especially now until April, the narrow streets of Cusco are thronged with visitors, both modern backpackers (not so much packs on backs but clothing that looks like a second-hand stall) and also Travel+Leisure baby boomers in new trainers and leave the gold behind in Atlanta GA, or, increasingly, Sydney. And as these people wander around, so they attract hordes of local women, in full everyday regalia, bright-coloured dirndl skirts, thick wool and nicely warm, their heads capped with either tall felt hats or what look like giant yellow patty-pan tins, upside down. They are invariably, too, either bearing babies, human babies, strapped in shawls on their backs, or holding baby lambs or llamas, or leading full-grown animals. They congregate by all top luxury hotels, even in Plaza Nazarenas in front of Belmond Monasterio del Cusco and Belmond Palacio Nazarenas, ready for photographs, but they are, like all the locals, absolutely charming. And even in the myriad of artisanal souvenir shops you feel really welcome. My favourite stores are side-by-side in narrow Calle Hatunrumyoc, five minutes’ walk from both those hotels.