A boy breakfasts on his way up the 293 steps to Sacsayhuaman ...

Sure enough, as soon as it was light – just after 0600, here in Cusco – it was time to head up to Sacsayhuaman, the nearest historic site to town.  It was 293 steep steps up, and lots of non-stepped incline, so probably a further 400 feet was added to the 11,207 feet above sealevel of Cusco.

A small boy was walking up to the site, while eating his breakfast.  He greeted the gal with a simple Hola! (just like the magazine). 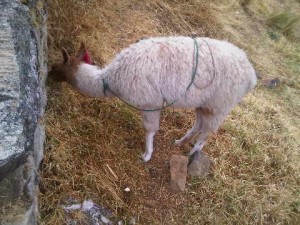 .. while one of his llamas forages for its own breakfast.

One of the llamas he looks after was also having its breakfast. Really, these animals are sensationally thorough.  Just as they, and alpaca, keep the lawns at Rio Sagrado, in the Sacred Valley, and all those terraces at Machu Picchu in such beautifully manicured order, so the surrounds on the walkways up to Sacsayhuahmen are shorn of every stray blade of grass.

I think of the late Austrian-born comedian and musician Gerard Hofnung who, on being asked what he did first thing in the morning, said he cleaned his tooth and shaved and what a pity it was that face hair was not some use to life. (His bricklayer’s lament is the funniest thing in the English language.) 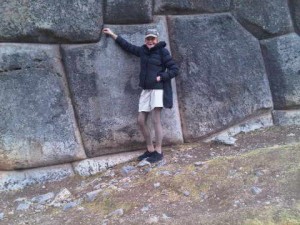 Up, in the chilly dawn, at Sacsayhuaman (look at the shape of the stones)...

Anyway, the gal made it up to Sacsayhuahmen, also known as Saksaq Waman, Sacsahuaman or Saxahuaman (only the ignorant call it Sexy Woman).   It is an Inca walled complex, a former fortress that was critical for maintaining control over Cusco, then capital of the Inca empire.

As with other Inca marvels, it is all dry-stone walled. It was presumably built by men – but interestingly the President of the present-day Dry Stone Walling Association, which apparently has over a thousand members, is a woman, Alison Shaw. 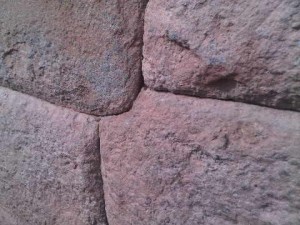 The stone work is sensational – many of the big stones are octagons, but the oddest octagons you can imagine.  It is thought they were rough-cut in quarries, and dragged, by hundreds of men, to the construction site, where they were shaped to final form and laid in place.

The architects were Inca but the hard work was done through ‘mita’ or ‘turn’ labour, whereby each village or group had to provide a certain number to take part in public work projects.  What an excellent idea. 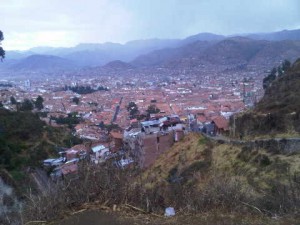 From the top of Sacsayhuaman, look down over the sprawling, beautiful, city of Cusco

From the top of Sacsayhuaman today you can look back down at the city and a sea of red terracotta roofs.  Oh to have the concession for tiles in this place.  It would also be quite lucrative to be a provider of woolly hats, and thick parkas.  It is cold first thing in the morning.

The local women, some of whom are only about four feet tall, still often wear tall felt hats, fedora-style, and brightly-coloured shawls over sweaters and below-knee skirts that must be made of as much fabric as men’s kilts in Scotland.  These locals skip or sometimes run down Cusco’s cobbled streets, which can be near-diagonal in places. 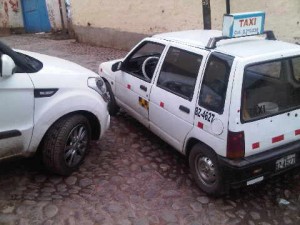 Traffic blockages are the norm, in such narrow streets.

Because of the narrow roads, with two-foot-high narrow pavements and right angled  corners, it makes sense to have small cars.  Roads suddenly switch from two-way to one-way, which can cause, well, hiccups when taxis have to reverse a long way down, only to find that the corner they want to turn into is blocked the other way.  It is all pretty good-natured, with no honking of horns. 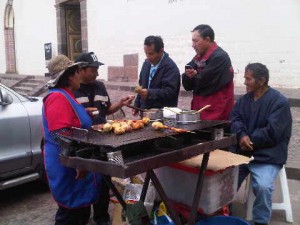 Potato skewers are being barbecued in Plaza Nazarenas

And everywhere is meticulously clean.  There simply is no dropped litter, not even cigarette stubs.  The only person I have seen smoking since arriving in Peru six days ago was an American living in Guatemala who could not ‘do’ Machu Picchu without a drag. There is so much going on, so much to see.  In Plaza Nazarenas, potatoes are being barbecued on long skewers.

Plaza Nazarenas, has, on its perimeter, Cusco’s three best luxury hotels, Inkaterra La Casona and the two Orient-Express properties, Monasterio del Cusco and its new sibling, Palacio Nazarenas.  It also holds the fantastic Museo de Arte Precolombino MAP, which has exquisite pieces from the main Museo Larco in Lima (that one has recently been re-designed by Ulla Holmquist, but even this much smaller one, open until 2200 every night, makes the displayed treasures look good).  Outside in the square is a statue, dedicated in 1985, to Don Manuel de Mollinedo y Angulo Obispo del Cusco, the city’s Archbishop 1673-1699. 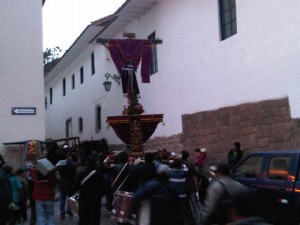 A lifesize Holy Effigy is carried through the crowded streets

If you are lucky a procession may pass. Today, about 20 men somehow manage to raise a contraption that supports a larger-than-lifesize figure of Christ on the cross.  They carry it, presumably to the Cathedral, dodging passing and stalled traffic, and the tourists back from Machu Picchu but not too exhausted to take yet more photos.

And then, as happens nearly every morning or every evening, a few fireworks are let off.  No wonder Cusco is becoming an ever more popular destination – worth every penny of the high cost to get here.