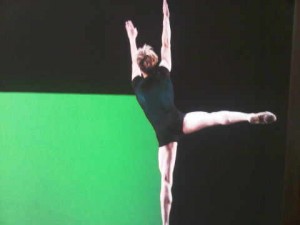 Back in Madrid, alive with happiness at the European Cup win.  Despite the anti-banking and anti-construction feeling, today, at least, everyone is happy.  There are lots of smiles.  Interestingly, a local Madrid hotel company called Room Mate Hotels is looking for a good face to represent its latest hotel.

For some reason one-time Olympic horseman Kike Sarasola, who runs Room Mate Hotels, is holding a Facebook beauty contest looking for a man (sic) whose name will be given to his latest Barcelona hotel.

The gal says disgraceful, and turns her eye to more beautiful things – like the art display in the historic bar of the Westin Palace. The art-like photos, by Remanos de Nacho Dury all show dancers from Ballet Nacional de España and not surprisingly many have sold, at a thousand euros and up. 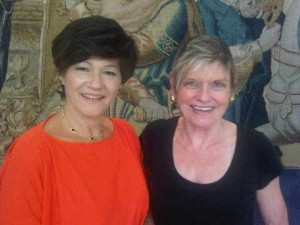 Choose a face of modern Spain and you could well choose Alicia Romay.  She is the Jane Fonda of the nation, with over 70,000 hits a month for her keep-fit, keep-well HOLA! blog, sponsored by Reebok.  She is also one clever lady.

Her husband, Marc Lannoy, boss of the Westin Palace, is also one clever man. Back in the bar, all buttoned leather and orchids, he has an Enotec wine-by-the-glass machine, four reds and four whites changing monthly.  This is curated by Spain’s most important online winehouse, Todovino, which also has a direct-sale boutique in the hotel’s lobby, near the Loewe store.

Todovino, by the way, also manages Iberia’s outstanding Business Plus wine programme, which extends to the Dali Bar in the club lounge at Madrid’s Barajas airport – the airline’s wines are chosen and expertly described by Custodio Zamarra, Sommelier of Zalacaín Restaurant. 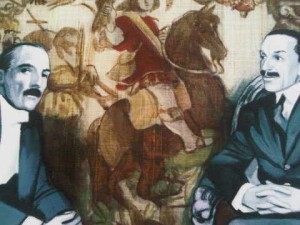 Also leading off the lobby of this classic hotel is a unique hotel museum that Alicia Romay devised and put together.  In 1912, a Belgian called Georges Marquet bought the Palace of the Duke of Medinaceli as his existing hotel, The Ritz – just across Plaza de la Lealtad – was too small.  On this bigger site he built an 800-room Palace, designed by architect Edouard-Jean Niemans.

The museum shelves include a bakelite telephone dating back to the opening: this was the first hotel known to have phones in all bedrooms. There are historic menus, some of which are being recreated as part of this year’s centennial celebrations.  July 12th, 2012 will see the launch of a series of Shaken But Not Stirred Cocktails. 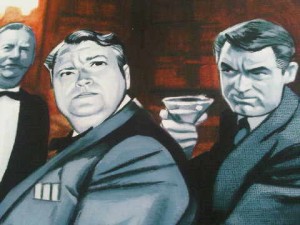 There is also a new book being published to celebrate a hundred years, with caricatures by Fernando Vicente, imagining Salvador Dali, Cary Grant, the Rolling Stones and other famous guests of the past.

Today, the luxury hotel is down to 468 rooms, and it is busy with business and leisure visitors, many coming to the Thyssen Museum right next door.  Local people come to take tea in the central Rotunda, splendidly redecorated by Diego Gronda, local partner of David Rockwell (love the pale sage and pale raspberry furnishings). 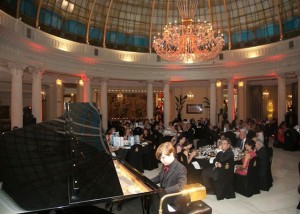 All the furniture was removed, however, for a fabulous evening on June 28th, 2012, to introduce 150 top Spanish press to the hotel’s centennial year.  The Big Wall Band, directed by Juan Muro, played Louis Armstrong and George Gershwin and Glenn Miller but it was not only looking back.

This evening was intentionally looking forward. Star of the evening was ten-year old cherubic pianist Michael Andreas Haeringer, from Barcelona.  He played six pieces, including Bach, Chopin and Mendelssohn and his own Nightmare within a dream. 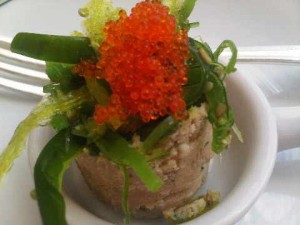 Another star that night was Diego Guerrero, identified by Ronda Iberia magazine as one of Spain’s top-ten rising chefs. He cooks at Club Allard, in Madrid, but he is also doing a two-year consultancy with the Westin Palace on banqueting and special events.  Eating in a glass-topped winter garden (for that is what the Rotunda is), is not always stylish, even in a luxury hotel.  But this one works.

Combine history with that Diego Gronda design, and add Diego Guerrero’s inspiration.   The kitchen might send out a tuna freebie, a miniature tower topped with a profusion of red caviar and strings of spring onion.  For a light touch, follow this with Burratina with green vegetables in aloe confit with black olive paste.  You feel so fit after this that even Alicia would approve. 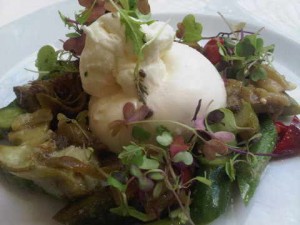 .. followed by burratina and vegetables.

There will undoubtedly be a more elaborate menu, also Diego Guerrero, on October 18th, 2012.  That night the hotel will celebrate its hundred years with a mammoth gala for 330 invited guests, each of whom will donate a hundred eurosto the hotel’s charity for kids with cancer, Fundación Aladina.  This is a hotel that gives, and everyone feels better as a result.