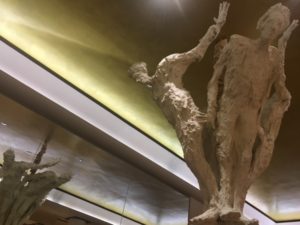 Angels on the lobby ceiling

If Claudio Ceccherelli had achieved his childhood ambition of being a professional footballer he would be known as one of the great characters of the game – move over Messi, Ronaldo and the rest. Instead, as one of the top travel advisors’ best-loved GMs, he has taken one luxury hotel after another even further up the ladder of perfection and elegance. From Villa d’Este he moved to Park Hyatt Milano, and thence to what is now Grand Hyatt Martinez Cannes. Now, in charge of Park Hyatt Paris Vendôme, he is once again weaving his creative magic. He does, mind you, have the stage for this. Look at the fabulous Orchidées breakfast buffet, above. Look left at three angels hanging from the lobby ceiling. 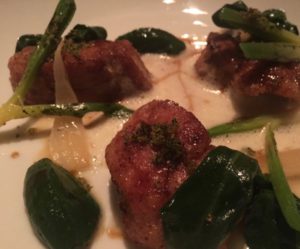 When designer Ed Tuttle converted what had been the 1891-vintage headquarters of couturiers Isador and Jeanne Paquin, on rue de la Paix, he produced a golden 199-room hotel unique in its flying-angel sculptures on everything from ceilings to window knobs (in room 221, one of the smallest in the house, there were eight angels of various sizes – see the video, below). But now the hotel is 15 years old and some things are being tweaked, still by Ed Tuttle. Sensational green serpentine stone, from Lake Como, will embellish the outer lobby, giving a sense of colour to what is currently honey-hued and black marbles – and the team members working that area are all in black, too. In addition, in a couple of weeks’ time the first of the new-look bedrooms, with acres of gold-leaf framing windows, doors and as cornices, will be put to use. 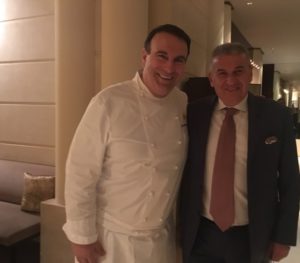 Obviously, being Paris, this is a hotel that has to offer good food, and the fine dining restaurant, Pur, is one of the most enjoyable Michelin stars on the circuit. It has a five-person chef’s table but we ate in the main restaurant. I wish I knew how to smoke spinach: my main course of crispy sweetbreads with dollops of smoked spinach purée was heavenly – somewhere it also had Swiss chard and mini leek, citrus zest and juniper berry in the recipe. I liked the way, at the front of the menu, chef Jean-François Rouquette thanks, by name, so many of his mentors, people like his Lebanese baker friend Issam, and Oé San who taught him shabu shabu. I also liked the unpretentious serving of the Chassagne-Montrachet Vieilles Vignes 2013 Thomas Morey, simply from the bottle held in a metal sculpture. 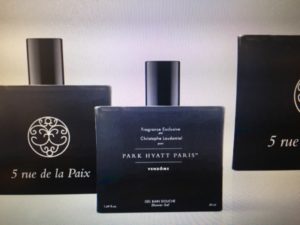 What seemed like only a few hours later, after breakfast, I was back with the boss of this luxury hotel hearing about future plans. Just as he had done in Milan, with perfumier Laura Tonatto, here he is creating a unique perfume for the hotel, branded not with its name but as 5 rue de la Paix, its address – his chosen perfumier here is DreamAir’s creator Christophe Laudamiel, president of the non-profit Academy of Perfumery and Aromatics (he was French national chemistry champion at the age of 19, went on to get a Master’s Degree in Chemistry from the European Higher Institute of Chemistry in Strasbourg before joining Proctor & Gamble and subsequently switching to designing perfumes, for Tom Ford and Estée Lauder and now for Claudio Ceccherelli. This man can orchestrate anything – thank goodness he did not stick with football. NOW TOUR MY ROOM, BELOW