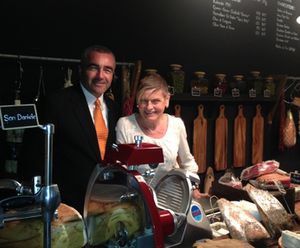 As James McGrath in The Little Big Book of Big Management Questions points out, top managers turn adversity into opportunity. At the luxury Four Seasons Hotel Bangkok, GM Vincent Hoogewijs has done just that. As a result of the recent troubles in the city, and elsewhere in Thailand, several of the retail outlets around the fabulous open courtyard of his hotel have become vacant. No problem. Now is the chance for pop-ups. One is a cigar store. Another is  Charcuterie, with indoor and outdoor seating. Only six weeks old, it is already gaining a good local following, says the gal – expats drop in for a regular supply of ham or sausage, or home-made páté. 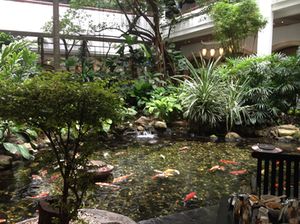 I love this courtyard. With tall trees and babbling brooks, filled with gigantic koi obviously fed with growth-hormone foods, it is a popular venue from breakfast through to evening. Two of the hotel’s main restaurants, Madison for steaks and Spice Market for Thai, are set around here, their outside areas spilling into the courtyard itself. Of course you can be sure that with a Belgian in charge, the food at this 354-room icon of a hotel will be outstanding (Mr H. has just returned from his homeland, where he undoubtedly had more than his fair share of his favourite beef tartare). 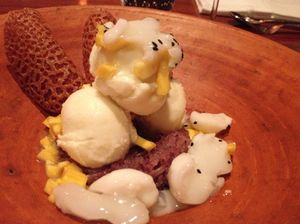 Tonight, in Biscotti, the Italian home-style restaurant that has barely changed since Tony Chi designed it 15 years ago, of course we had to start with the paper-thin, truffle-studded focaccia. Mr H. goes simple, then, with a tagliatelle to compensate for his holiday eating. For some inexplicable reason, we then decide to go mad, bold, crazy. We order a durian icecream, to share. Well, it was one bite each. At first, as is generally known, durian’s flavour is quite pleasant, a cross between papaya, really soft mango and egg custard. As your bite permeates your mouth, it becomes worse and worse. Two hours later, while waiting to watch a World Cup screening, Vincent Hoogewijs apparently felt ‘off’. For me? I woke up in the night feeling ‘bad’ (for those who have never eaten durian, check Google for its casserole of lavatorial and other undesirable smell and taste descriptions). 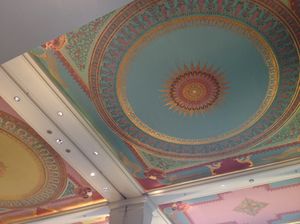 Anyway, done that, and never again. To pleasanter things. The two-floor  rectangular lobby of this hotel is decidedly Peninsula-like, a reminder that the hotel was indeed Peninsula for three years after its 1982 opening – then it became Regent, switching to Four Seasons in 2003. Now the lobby is where action happens. The bar at one end erupts, as evening falls, into a big dayglo blue display. By day it will be back again to a white bar-front, and elegant servers in pale salmon silk dresses that exactly match some of the giant hydrangeas in today’s flower displays. At the back of the lobby, an all-wall mural, with lots of gold, shows stylised traditional Thai scenes. Overhead, there is more gold, on the computer-accurate pale patterns filling ceiling panels. 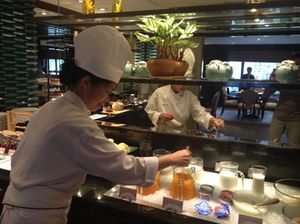 The knowledgeable buy lounge access, here. Breakfast can be rather busy, with up to 600 people all wanting to go the rounds of Madison’s multi-station buffets, and then find their table, either inside, or in the courtyard or into Spice Market. Breakfast in the lounge, by contrast, is the epitome of calm – and unlike some club lounges, the food here is not a downgrade of what the main breakfast offers. Here, a chef in pristine whites exactly re-arranges some buffet items, and a colleague insists on making your (excellent) coffee, even though you could quite easily manage the multi-choice machine yourself. 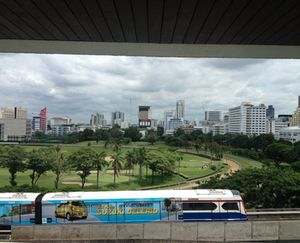 From 704, look over the Sky Train to the Royal Bangkok Sports Club

Yes, an ideal stay here definitely includes using the lounge, at breakfast and cocktail hour, at least. In my case it also includes several trips down 34 wood steps, past six wall-set sculptures, facsimile body parts of caryatids of Roman times, down to the gym. You look out, through an all-wall window, into lush greenery. I am surrounded by more greenery in the outdoor pool. And I can look out at yet more grass, in the form of golf course and race track, at the Royal Bangkok Sports Club, directly across Rajadamri Road from this luxury hotel. There is, by the way, a Skytrain station within a couple of minutes.