Looking up into Okura's ballroom ceiling

Hotel Okura Amsterdam’s ballroom is stunning – soft grey walls and, overhead, ten giant (five-tier) gold-disk ‘chandeliers’. These are in recessed ceiling panels, which can be suffused with dayglo purple or any other colour. Look up, in case a meeting (or wedding?) gets boring. 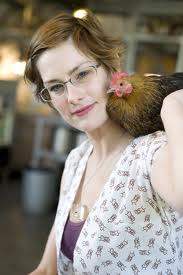 There was nothing boring about the recent Leading Hotels of the World convention held in town, with work sessions in that self-same ballroom.

Take one of the speakers, Marije Vogelzang, founder of Eating Design.  She used to have two Proef restaurants, in Amsterdam and Rotterdam, which she also used as her research laboratories.  She is certainly creative, producing edible art, historical food, healthy food, crazy concepts.

Speaking at the conference

She is working with supermarkets to present packaging for healthy fast food that is more attractive to kids.  Crazy food?

Well, think of a long table seating people along either side, but instead of having a table cloth that touches the floor it is taken up, suspended from the ceiling.  In the hung-up parts, cuts are made where diners’ heads and hands poke through.

Diners, down either side of a long table, sit with heads and hands through slits in the up-sided tablecloth

This is crazy getting to know you stuff. Inside you might find, in front of you, a plate that is in fact two halves, both holding a steak portion.

Opposite you is a face and a pair of hands and, in front of them, two half-plates both holding fries.  Ergo you get to know the face and hands opposite as you swap plates. She did this in the Netherlands but, unbelievably, she did it in Tokyo, with some trepidation but it worked….

Back to reality. A session was over and lunch beckoned.

At the dine-around in the luxury Okura hotel, there are three Michelin stars, two for the French Le Ciel Bleu, run by Onno Kokmeijer (who apparently is introducing his own-brand caviar next week) and one for the Japanese Yamazato, where Akira Oshima runs the stoves – the hotel is Japanese owned.

We ate there, from exquisite bento boxes, complemented by miso soup and wild rice with seaweed.

Wow, this is a hotel, run by its President Marcel van Aelst, that has everything – what seems like seven restaurants, all of them full, an excellent indoor pool and good Technogym, and now it will have a proper Japanese spa.