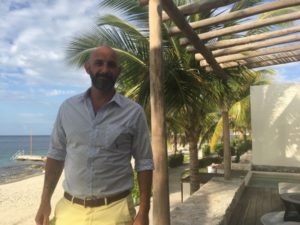 Cozumel is a 249 square-mile island 12 miles off Riviera Maya – yes, it is part of Mexico, but acts as if it is independent. A permanent population of 100,000 is boosted by four million cruise passengers a year. As Andres Garcia Ricard, the Uruguayan GM of the island’s only luxury hotel, Presidente InterContinental Cozumel Resort & Spa, says, the ships (or, to be more accurate, floating apartment blocks) arrive at dawn and sail away at sunset. This is so they can open the casinos onboard, says the gal. 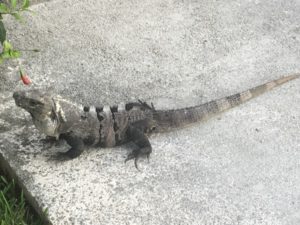 Cozumel therefore survives to a large extent on tourism. Get off a cruise ship, say the gorgeous Seven Seas Mariner, and at the end of the jetty you are immediately surrounded by a jumble of souvenir shops and duty-free stores. The liquor sellers do a good job in offering alcohol to passengers on ships that are not all-inclusive (Seven Seas Mariner, of course, is fully inclusive, which includes such excellent wines as Cline Family Cellars 2014 Zinfandel Ancient Vine). While we were docked at Cozumel, I headed over to see Andres Garcia, and have a look at his 218-room hotel. 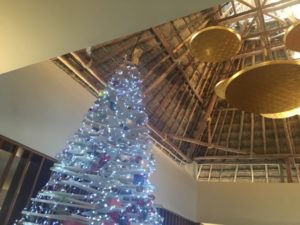 Looking up at the hotel lobby ceiling

When they built this hotel, way back in 1969, did they know that highlights would not only be the half-mile of beach and superb diving, but also the tame black spiny-tailed iguanas that wander around as if they own the place? Apparently they never get into the bedrooms, but they seem to wander all other areas of the hotel, which are spread out, with lots of open-sided corridors and an open-sided main lobby. There are two Presidential Suites, by the way, both 4,000 sq ft – one is more open, one more private. 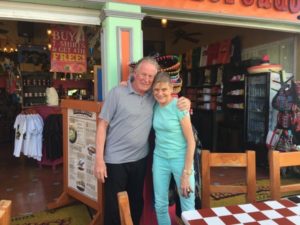 Back at the pierside I met up with long-time friend Jeremiah Tower, he who, with Alice Waters, was largely responsible for the genesis of Californian cuisine. After he finally gave up on San Francisco’s most famous restaurant, Stars, he was relocating to New Orleans when Katrina hit, ruining all his belongings except, fortunately, his precious cookbook collection, safely deposited elsewhere. Anyway, while holidaying here in Cozumel he decided to stay put but now he is relocating yet again, across to Europe, to outside Seville, well placed to promote his latest book, Table Manners: How to Behave in the Modern World and Why Bother. Also upcoming is a CNN documentary, Jeremiah Tower: The Last Magnificent. This guy has more energy than ever and, my goodness, does he have style – his favourite luxury hotel worldwide is Four Seasons George V, in Paris (and not only for Jeff Leatham’s floral masterpieces).