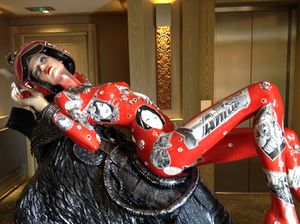 Greeting, at the K2

Time to see some other people up here in the Courchevel 1850 coterie. As of April 6th, 2014, all the top luxury resorts had closed until December – with the exception, that is, of K2, which closes today, April 11th, 2014, though apparently it is quite likely that the owners might be popping in and out as they have other responsibilities around. And fortunately some ‘stunning women’ will remain, pieces like this life-size sculpture by Parisian artist David Cintract, described as Lichtenstein meets Warhol.  This 34-room hotel, says the gal, could actually be described as a gallery to hold artworks and toys that were already collected by those owners, hedge fund supremo Stanley Fink (now ennobled, he is Treasurer of D. Cameron’s Conservative Party in the UK) and French architect Philippe Capezzone. 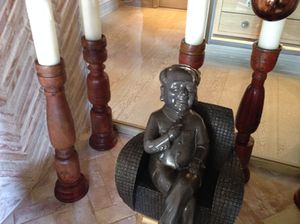 The Winston Klub is the hotel’s 24/7 cigar bar, and it boasts a bronze head of that great Englishman, Winston Churchill (how Cameron must wish he had a similar following).  The Klub club also has this bronze of Chairman Mao, smoking a cigar.  Why Klub, by the way? Well, this is all K. The Capezzone-Fink partnership, which includes their talented wives, bought an existing Courchevel hotel, the Kilimanjaro, pulled it down and built anew, retaining the name.  When they wanted to design and build an even more exclusive pad, where rooms are 30 percent more expensive, K2 seemed natural. Here, they have put in an oval pool – look across, as you swim, at a blazing fire (actually a video), flanked by all-wall windows out to the snow. 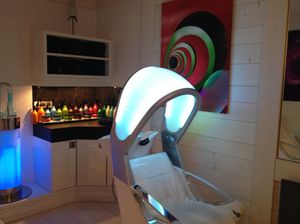 Time for a hair wash?

Here, at this new Leading hotel, you have a La Prairie Spa, and a Shu Uemura hair salon with dayglo hoods for the hairwash units that change colours the whole time, as does the container, behind, for natural rainwater, to make your locks even more silky. Head across to the gym, which has a wall of back-lit bricks of Himalayan salt, and you not only have the latest Technogym range but also a Cicotte bicycle, which I have only hitherto seen at Costa Smeralda, on display, and in the boutique at Le Royal Monceau Raffles, Paris, on sale.  There are toys for everyone, any age, here. Kids have a room with a corner castle, and a long slide.  All ages love an all-purpose room that can be a cinema for showing movies, or a disco, or a birthday party venue. 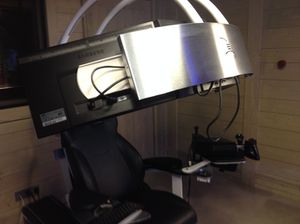 Or a full-size flight simulator?

And what about the two flight simulators among the electronic toys- for-boys in a room that is near another with an electronic floor – set your required ‘game’ or ‘discipline’ and squares of the floor light up and you have to balance and or move accordingly. Of course there is snooker, and nearby is a sofa with faces of the four Beatles printed on its back.  For the second time in five days I pose with the boys (last time was the sculpture quartet high above Almaty) – what is the appeal of these four faces, and how do they fit into the eclectic art gallery that is K2? But it is more than an art gallery, it is thoughtful.  In bathrooms, robes and slippers are stored in the glass-fronted sliding door, out of general sight, and scales sensibly hang on the wall. Open the good-looking minibar unit and it has its own sink. The safe is an enormous, two-foot-tall affair: open it and there are three shelves, one for laptop, one for jewellery and one for watches: put a self-winding watch on one of two stands and it slowly moves, simulating human arm movements. 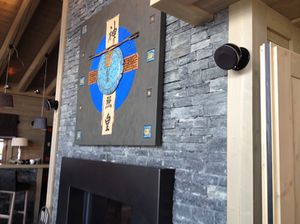 This painting, above a real-log fire in a private villa, is one of 200 versions throughout the hotel

Outside each bedroom door, in the green and grey-washed pine corridor, hangs a fox tail with hanging felt streamers. The corridors have repeating Tibetan letters carved into them, saying K2. Variously around the entire property are strategic Himalayan paintings, as shown here.  This one is in the living room of the smallest of seven attached, but seemingly detached, villa chalets.  This, the smallest (and closest to the main hotel) is the 5,000 sq ft, four-floor, five-bedroom Panmah, which comes with a big, do-use-it, Miele kitchen, an indoor pool with wave machine, and a spa room, plus your own ski-in, ski-out.  You have a private butler, of course, plus two chefs and two maids.  The fire beneath the painting, in the photo, is real. 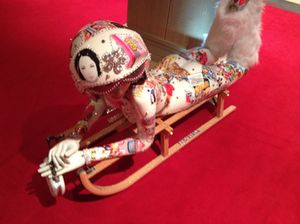 And another Miss Courchevel

You wish that these Miss Courchevel sculptures around this luxury hotel were real, too.  Presumably they too will be packed away for the summer, but she certainly looks as if she is ready to buzz down the mountain at a moment’s notice.  I, sadly, have to drive away. As I leave, going past the front desk that is flanked by two ceiling-high fire towers, the concierge hands me my boarding pass, and GM Jerôme Revolta offers a hotel to-go bag, with Evian water and Pepsi, and hotel jars of nuts and jelly-beans.