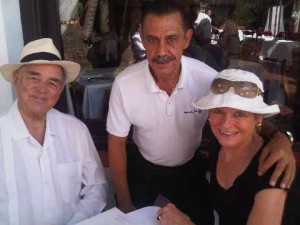 Count Rudi is one of the world’s best story-tellers, not only because of his magnetic personality but because of the tale he has to tell.  It is he who has ‘made’ the Marbella Club over the years. Who is this guy, asks the gal?

Everyone calls him Count Rudi. He was brought up in Saxony, with a German father and Polish mother and grandparents from Belgium and Czechoslovakia, and he was working in Hamburg, at the Vier Jahreszeiten, when a distant relation called by and asked him to run HIS hotel.  This was Prinz Alfonso Hohenlohe-Langenburg and his ‘hotel’ was a luxurious motel that became the Marbella Club, today’s home of authentic luxury. 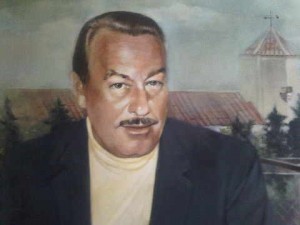 A 1997 portrait of Prince Alfonso

The story of the prince is a who’s who of anyone, from the Club’s 1954 opening to the present day. The index of the hotel’s story, The Marbella Club: The First Fifty Years, gives a clue.  In alphabetical order we have Gianni Agnelli, King Alfonso XIII (he who opened The Ritz Madrid), Brigitte Bardot, a couple of Bismarcks, Björn Borg, Richard Burton, Sir Michael Caine, Sean Connery, Tony Curtis, Placido Domingo, Kirk Douglas and King Edward VIII (who gave it all up for his American twice-divorcée Mrs Simpson).  That takes up through E.  You get the message.

The prince was also married several times, with a wife list that included Princess Ira Furstenberg and Maria Luisa Gaggero, who had previously been married to one of the English family that has basically run the hospitality world in Gibraltar, only 20 minutes away, for many generations …  this is sounding like a Hello! listing.  Let us get back to the real world. 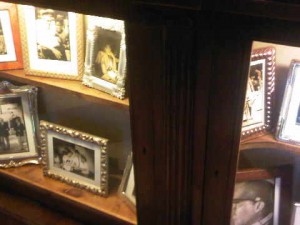 A somewhat superficial 1997 portrait of the prince (shown above) is in the elegant sitting room leading off the Club’s main reception.  You probably only go there if you improbably have something Serious to say, perhaps a business meeting (one of the vitrines in this room holds a 2001 certificate from the American Academy of Hospitality Sciences which suggests that the Academy needs to update).  Much more worthwhile are the illuminated display cases below front desk which hold dozens of photos of the seriously rich and famous.

The only problem is that you really want to duck down to see who is who and yet you have to stand up to talk credit cards and nasty things like that.

We were talking gorgeous things, the so-smiling Count and I.  Lots of his friends passed by, including the Grill’s justly-renowned Maitre d’, Alfonso Canca Vallecido.  I had been told he can always find a table for eight, if they are the right people and even if the Grill and its summer-long terrace are completely full, but he never ever smiles.  He smiled, just about, for his photo. 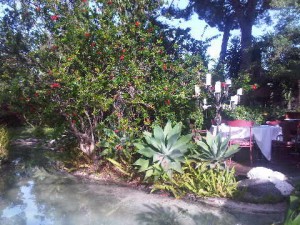 The displays of candles on the Grill terrace will be lit, come sundown

We were sitting on the terrace, near some of the candle displays, some with their falls of wax that go back to the Grill’s opening in the early 1960s.   Gosh, in those days Count Rudi was a dashing bachelor.  Then, more Debrett than Who’s Who, he married Princess Maria Luisa of Prussia and they had two children.

One, named after her godmother, Queen Sophia, runs an events company but no, it was not she who organised Sting two nights ago (the other works at another, albeit different, iconic hotel, The Savoy).

Count Rudi is 80 in a few months’ time but is as alert as someone half his age, and still 100 percent dashing ….  what is his secret? Love of life, and this gorgeous Paradise. 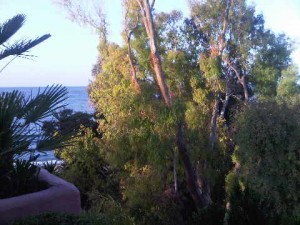 Morning view from 310, through greenery to the ocean (and Morocco in the distance)

It did feel like Paradise this morning.  The excitement of last night (Spain winning the UEFA Cup was just too much). I woke up in 310, one of the 121 all-different rooms in the main Marbella Club.  Some are in two-floor blocks, really like a (royal) motel.  Others are massive single-floor bungalow villa complexes, with pools. Others, like mine, are in the four-floor terracotta block down by the Urbanizacion Marbella Mar corniche and beach.  Morocco is in the far distance.

The spa is directly below me.  Later, I will head down there to its thalassotherapy pool with inset vitality stations (I need to come back, another time, to try a Babor treatment).

For now, it is out and about.  Down on the beach, a cyclist has left his machine to walk out along the Marbella Club’s pier. 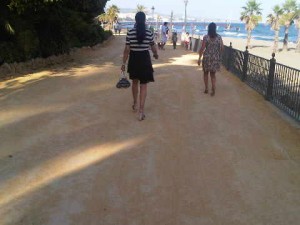 There is something magical about this hour of the day, wherever one happens to be.  Water helps.  I think of recent early mornings, in Fukuoka, Shanghai and The Bund, Positano.

Today, jogging along the immaculate pathway, I pass groups of ultra-fit regulars, and a sun-worshipping older woman whose skin has turned to a prune (does she ever look in the mirror?).  A woman totters by in incredibly high Manolos (more suitable a name, here in Spain, than red-soled Christians..), obviously still dressed up from last night.

Just as everything starts so late in the evening, the same can be said for the general mass when it comes to the morning, here on Spain’s south-west coast. 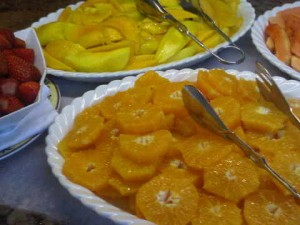 The breakfast buffet at eight has only two takers, so far.  I help myself to fabulous fruit (no prunes!), fuel for fitness and life.   I read about all the events about to happen at the Marbella Club.

The National Showjumping Competition is being held here July 13-15, 2012.  One-off concerts will be featuring Gloria Gaynor on July 7th, Bryan Ferry – he who loves the gardens here so much – on July 20th, and Chaka Khan on August 14th.   And then, further ahead, there is the annual tennis competition, and the every-year kind-of-double-triathalon Spring Games, and at all times Marbella Club will be able to offer its own skiing, at its newly-purchased Sierra Nevada lodge.

No wonder Count Rudi keeps perennially young and on his toes, he has so much to look forward to.  And, by the way, when we meet as planned, at 1100 precisely, every breakfast table on the terrace is occupied.