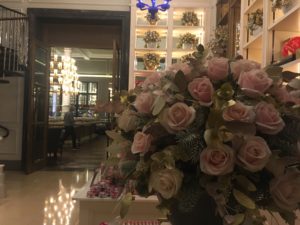 Go through the flower shop…

After a long evening of culture and politicking and networking and so on, it was not surprising that one or two of the luxury hoteliers who gathered in London for the city’s first-ever meeting of the Global Hotel Alliance GHA were not at their best, or even present, at breakfast. But the gal would not miss this breakfast for anything. The Corinthia Hotel London knows how to do everything with style. As preamble, it was essential to pay a visit to the gym, which of course is 24/7 and naturally has not only Technogym equipment but the latest range, and lots of it – and, thoughtfully, Pilates balls and weights are hidden out of general sight, cocooned from the fray. 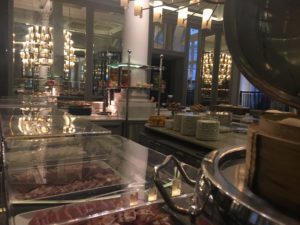 .. to Northall, for breakfast

Now I have raved before about this hotel and I am sure I will do so again. Next month it celebrates five years and I asked Corinthia’s CEO Simon Naudi the secret. It was minutely planned before its opening, December 3rd, 2012. He worked with those who knew and executed the best, say interior designer Terry McGinnity of GA International, and ESPA’s Sue Harmsworth on wellness. But, says Naudi now, every little detail has to be looked at afresh. He points to a china pot holding sugars, takes up the pot’s sugar tongs, explains that he has asked recently-arrived Thomas Kochs, who is best known for his earlier spell at Claridge’s, to look again at every minutiae. I hope they do not change too much: outside every bedroom, for instance, a waist-high table sits in a recess, not protruding into the walkway but there to hold morning newspapers so much more elegantly than if they are put in a door-hung bag, or just placed on the floor. 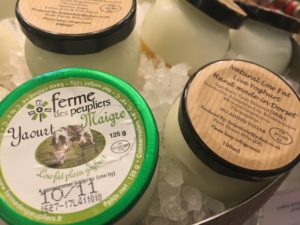 A choice of designer yoghurts…

Simon Naudi is going to change breakfast slightly. Yes, you will still enter Northall restaurant via the hotel’s florist – he is actually going to have florists put into public areas in all Corinthia hotels (why hide them away, he asks? This is the most colourful department of any hotel). But Northall is two big rooms, with a small lobby between, and right now the buffet is on the bar-counter top of the first room. It will be relocated to the rear room, which makes sense. Oh the buffet, it is superb, and, by international standards, excellent value at £35, including a selection of hot dishes. This includes lots of berries, and open bowls of yoghurts as well as designer-pots from the globally-renowned Ferme des Peupliers and an English craft-yoghurt, from Hot Jam Lady in Poole, on the South Coast. 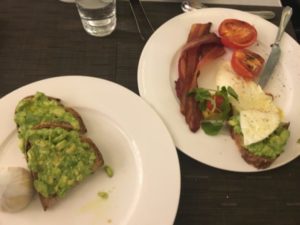 Butter is in individual-portion greaseproof paper wraps (no plebeian ‘butter tubs’ here) and preserves jars are from The Wooden Spoon in Kent. Toast, made from really healthy bread, is brought in silver racks. The growing number of discerning Chinese at this luxury hotel find congee and dim sum on the buffet, and of course they, and anyone, can order from the pale turquoise leather-covered à la carte menu. This suggest brainpower dishes, say gluten-free quinoa porridge with flax seeds, linseed and coconut water – or go the opposite extreme, with Corinthia hot chocolate, with chocolate flakes, marshmallows, and, you have guessed it, whipped cream. I am more impressed by one of the GHA delegates who is obviously an avo addict: from the menu, he chooses both avocado with his eggs and a side order of crushed Hass avocado on toasted sourdough. Breakfast over, I head back up to the extremely agreeable bedroom 427 that I have barely seen – just time to make a video, below – and rush for my train.  SEE ROOM 427