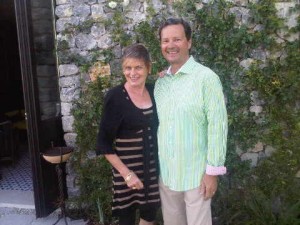 It is Hans Maissen who has made Bianca Sharma’s divine luxury resort, Monastero Santa Rosa, work – although it was touch and go.  Right up to a few hours before the arrival of the first guests, who happened to be HSH Prince Albert of Monaco and his wife HSH Princess Charlene, he was ready to delay the whole thing.

The hotel opened May 17th, 2012.  Until a week beforehand there had been no electricity.  Until four days before opening there was no phone. The chefs could only move into their kitchen on May 16th. The royals’ attendance came about because Maissen has known HSH for many years, and he had told him about ‘his new hotel’.

When the palace called and said they wanted to come for a weekend it was publicity made in heaven: within a couple of weeks such dignitaries as the head of Italy’s main television network, RAI, arrived. 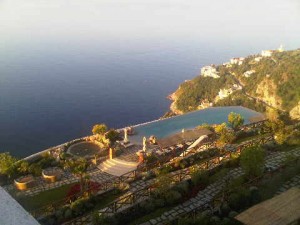 All 20 bedrooms give sensational views to the Mediterranean, far below

This place will thrive on contacts, says Maissen.  Because it only has 20 rooms and at present it is open April to October, he does not consider he needs the help of professional matchmakers, also known as consortia.

He has put in place his own considerable support teams, in Frankfurt, London, Milan, Moscow, New York, Rio de Janeiro: in the first two weeks of operation he received 35 top travel agents and 25 press. In December Monastero Santa Rosa will be at ILTM in Cannes.

A ten-day photo shoot by Robert Miller has taken web-presence up many notches. After one year he hopes to see a business spread of 25 percent Italian, 30 percent UK and 35 percent USA. All guests will find stunning views down 1,000 ft to the Mediterranean, a couple of miles west of Amalfi. 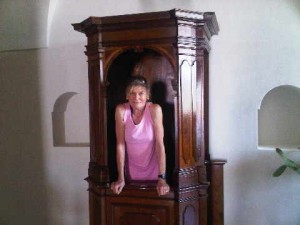 A much-used confessional, found in a junk yard, has been restored (interestingly, it affords about the best mobile phone connectivity anywhere)

What is it like, taking on a project like this?  Eleven years ago he was asked by Bianca Sharma, whom he met through a Swiss contact, to consult and take her dream of turning her dilapidated old convent high above Amalfi into one of the world’s most luxurious and desirable hotels.   Way back in 2001, he anticipated a few years’ work, no more.

The first thing Maissen did on being appointed was to work out an operational budget with the owner’s accountants.  Her budget covered all immoveable hardware, like renovating the building, landscaping and filling the garden, putting in the outdoor pool and constructing one of the world’s most awe-inspiring spas.  Her budget included the antiques that she continues to buy, and new one-off items like sensational mirrors in each bedroom. 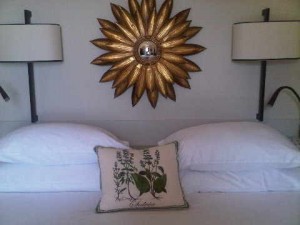 Each bedroom has a sensational mirror, plus old prints and new abstract art

His budget had to include everything back-of-house, behind the scenes.  This meant itemizing over 2,000 items in all, the same number as for a 1000-room monstrosity rather than a mere 20-room ‘monastery’ (for which read convent) conversion.  He just needed far fewer of each item, which influenced suppliers to go slow with his orders.

Nearly all items on guest-show were initially chosen by, or with, the owner, who flew the top team to Venice at 0500 one morning to choose the stunning blue glass Murano show plates in the restaurant.  The chef, by the way, Christoph Bob, is German but married to a local Amalfi woman and he has been in the area for several years – fresh produce, he says, is his secret. 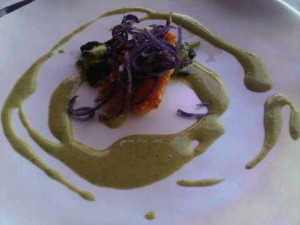 Red mullet taster, eaten on a terrace looking far down to sea

Maissen had to hire all the staff.  He found GM Flavio Colantuoni and, with him, selected managers and line staff.  They needed a complement of 47 – both gardening and laundry are outsourced.

Maissen wanted everyone, if possible, from within a radius of three miles, and with the exceptions of the American pastry chef and the Italian maitre’d, who came from Le Pergola, the Michelin three-star restaurant atop the Cavalieri, a Waldorf Astoria hotel in Rome, he achieved it.

They started recruiting September 2011 before the Amalfi-area’s seasonal staff started retreating to the mountains for winter work.  Only placing details online, they got over a thousand applicants in a week, but those chosen only joined the hotel for training a few days before opening. 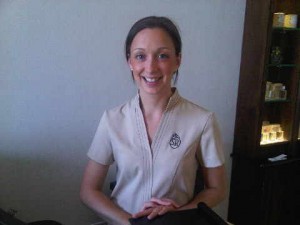 By opening day, miraculously, the inside-outside restaurant was able to offer breakfasts with home-made yoghurt and some of the best whole-wheat croissants (and much more), and a simple lunch menu (burger if you must) and set-meal dinners or an exciting à la carte, which includes nettle gnocchi with scampi.

The hotel’s hands-on owner, Bianca Sharma – who sleeps in every room, if free, to make sure everything is perfect from the guest viewpoint – will also be eating there.

From early on she knew she had to have a significant spa and was introduced by a designer she had worked with before to Neil Howard, whose clients include all the big names, from Boca Resort to The Savoy via Four Seasons, Maybourne, St Regis and Taj. 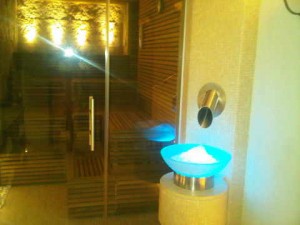 Howard in turn brought in spa designer Jane Goff. One room is a spa suite, all of 800 sq ft on two floors, is aimed at mums and daughters, and hen parties and girls’ days out.  They find showers and rasuls for two, and a pair of massage beds inside (and another outside) and a pair of the latest Madeira by Proforma steam-and-Vichy beds.

But as always it is the treatments that count, and here the products are Santa Maria Novella, the early 17th century Florentine company also used by Four Seasons Firenze. Spa director Francesca Speroni – who coincidentally has the same Mediterranean-blue eyes as Bianca Sharma – was last running a spa villa in Doha.  Here she has four therapists, and she worked out the treatment protocols with Howard. 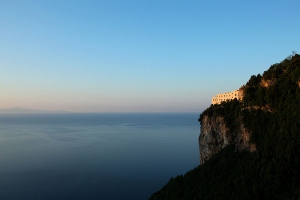 Rush up to it now – the 20-room Monastero Santa Rosa

Goodness only knows what a glycolic resurfacing is (sounds like re-tarmacing a road) but, by golly, it felt good.  No wonder Condé Nast Traveler, Travel + Leisure and all the biggies are rushing in – and, Jo Foley, queen of England’s spas, are you listening?

Hans Maissen finished what turned out to be an 11-year consultancy end of this May. But now he is onboard ad infinitum. Maissen Management has been appointed to run Monastero Santa Rosa, with the charming professionalism of GM Flavio Colantuoni and his team.  As one guest said this week, this is honestly the most agreeable group he ever remembers and, as in any business, it is led from the top.