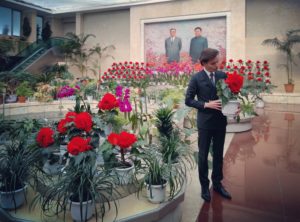 Thankfully, the Sybaritic Single’s preferred refreshment, champagne, never comes in plastic bottles but what about mineral water? Better luxury hotels have done away with plastic and the Sybaritic Single loves keeping a glass bottle of Chateldon on his bedside table, perfectly chilled. One might argue that freighting Louis XIV’s favourite water all the way from Versailles is bad for the planet. However, mineral waters travel by sea on gigantic container ships rather than by air like most perishable produce, therefore the carbon footprint of a bottle is close to nil (66 times less than anything brought by air, to be precise). In addition to that, locally produced table waters in many destinations come from desalination plants which burn tons of fossil fuel each day. The process also takes a heavy toll on ocean biodiversity.

Before the Sybaritic Single closes the subject of CSR and continues with his light-hearted travels, he wants to share a story of a luxury hotel in the heart of London’s Knightsbridge.
Once upon a time, the establishment employed a crafty general manager who used CSR as a veneer whenever it benefitted the bottom line and wished nobody would notice. One day, the hotel received a lengthy petition from a global organisation requesting that it suspends its adult HDTV pay service in order to fight exploitation of women. What a wonderful cause, one would think – and so easy to implement! However, as good as it seemed, the manager looked at the annual revenue line which clearly stated: £250,000. Naturally, the petition was promptly dismissed and the efforts to convince naïve guests to re-use their towels doubled.
The Sybaritic Single continues to enjoy luxury without guilt as he raises a flûte of rosé bubbles at the top of The Peninsula Hong Kong, illuminated in pink every October to honour Breast Cancer Awareness month. The hotel has been supporting the cause since 2010 with millions of dollars raised through pink-inspired services offered to guests – see an October afternoon tea, above. Engaging travellers in modern, enlightened CSR programmes and offering new experiences to treasure, rather than bluntly cutting cost, is the way to go for all luxury hotels.