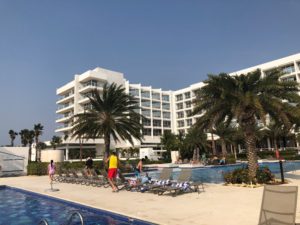 A white sculpture of a hotel

Conrad Cartagena is perhaps something of a misnomer.  This is a highly successful operation that is far far out in the country from Cartagena and its walled city.  The gal was put into a taxi with a charming driver who spoke not a word of English (this is Colombia’s weak point – the level of English comprehension, let alone speaking, is among the lowest in today’s travel hotspots). Eventually, after half an hour of driving over and through mango swamps, and little rural habitations that make you a weeny bit embarrassed, as if you are intruding by passing right next to someone’s hut-home, with the prized house cow tethered outside.  But they do not seem to mind.  Colombians are some of the world’s most lovely people.  And you arrive, to a six-floor white sculpture in the middle of seemingly-nowhere.  There are lots of outdoor swimming pools, all immaculately tendedand an 18-hole Nicklaus course, although the gal did not see a single player during her 20-hour visit. 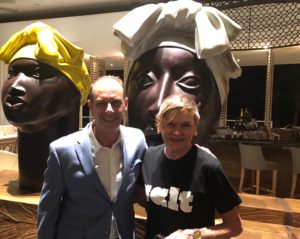 Stéphane Mercier is the boss of this 168-room hotel and it is a good thing he started out as an actor, back home in Nice.  He has been acting, as it were, ever since he arrived here. He did not speak a word of Spanish then (“I had to learn, quickly’). He had never opened a resort before.  The pace is different, he admits.  But it is no surprise that, as a Frenchman always should, he makes sure he has good food products.  Average stay here is four nights and, he says, typically they will dine in on two of those evenings (it would be unfair to ask ‘where else would they go?’ as perhaps some do brave a 30-minute cab ride back into town, and the same after dining, when typical global travellers just want to go to bed, as quickly as possible). 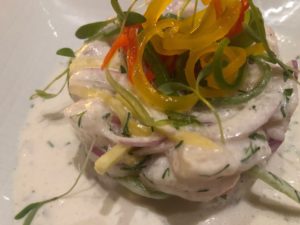 I dined spectacularly here, in Bibliotecke, the dinner-only restaurant that is supposedly closed Sunday and Monday but must have been kept open specially that night.  Apart from May, the month when the prevailing wind abates, it is generally too windy to dine outside, but it is very pleasant inside. We had the box of enticing home-made dinner rolls that is becoming de rigueur during my stay in this lovely country, and once again there was a choice of naturally-flavoured butters.  I actually went, tonight, for two starters, a plated seabass ceviche, followed by tataki of salmon with vegetables and kimchi. It was different, and it was good, especially with a glass of Trivento Malbec Reserve 2017 from Argentina. 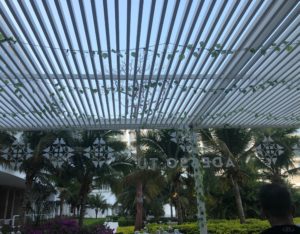 View from the breakfast table

I heard how this clever luxury hotel is fully equipped for everything, including buy-outs, and, indeed, they have a 200-strong group from Israel staying for eight days over Easter.  Yes, they can cope.  The kitchens are already kosher-compliant, though some Jewish guests at other times bring their personal chefs. This is also a hotel for weddings, dozens of them and more every year, as word spreads (put those two selling points together and it was therefore not surprising that at least 35% of all weddings here are kosher). Another selling point is the hotel’s beach club, a kilometre down a track skirting the golf course.  There is a 1950s-look street-car shuttle, but I hiked along, to the thatched roofs of the club house, a popular venue for parties hosted by those who live in the complex’s nearby apartment blocks. Yes, some get exercise by swimming down there, in the sea rather than one of the luxury hotel’s many pools – I used the 24/7 fitness centre.  And, after a good night’s sleep and the usual Girlahead hearty breakfast, I was on my way. SEE VIDEOS OF SUITE 505, AND LEAVING CONRAD CARTAGENA