Conrad Tokyo is one of those hotels that is used to hosting big events, but it certainly pulled out all the stops for the second ILTM Japan to be held here – how nice to see Hilton’s Samuel Chamberlain back from New York, and Hilton Japan’s Quality Manager Ari (Azwin) Ferdauz, returned temporarily to assist GM Neil McInnes in making sure that everything went faultlessly.

Comments from first timers at this luxury hotel were full of praise, says the gal, from the views from the 28th floor lobby – see above – to the serene feel in the 290 bedrooms, and throughout, the faultless service. This is the kind of place that remembers which newspaper you want, and how you like your coffee. 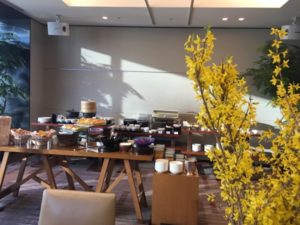 It also knows how to cope during temporary hiccups. The 39th floor Club Lounge is currently being re-done and expanded, to give two large rooms offering the choice of a city view, over Shiodome, or the other side, looking down over Hamarikyu Gardens and the Sumida River to the Rainbow Bridge and Tokyo Bay. What to do? A meeting room behind the 28th floor front desk made a plausible alternative and, typically Japanese, the breakfast buffet was exquisitely displayed, with lots of flowers. Ah breakfast, the only meal that many eat in a hotel, so really important. The main breakfast offering cleverly extends from the all-day Cerise restaurant to the neighbouring Collage, which later turns into French, for lunch and dinner.

But the extra space for breakfast offers light. While Cerise is an interior space, Collage has a wall of windows and the wall opposite it has mirrors set at the exact height to allow diners facing them to see what is reflected, behind. This was a really clever design concept by Takenaka Corporation – and of course, being Hilton, the food was great, too. I had a Nespresso machine up in lovely end-suite 3545 but there was no time to use it. Yes, as I have said so many times, espressos are now absolutely necessary in luxury hotels, and the easy-work Nespresso is the one that most guests feel happy with. Happy guests are more likely to become loyalists: Neil McInnes says at least 40% of people staying here are repeats.

I have a lot in common with the GM of this luxury hotel, who is also generally in the excellent Technogym by 5.30 a.m (though he has already walked his French bulldog by that time). We agreed that if we do not have an appointment we both like room service. Even though the hotel is currently offering inhouse guests a glass of Taittinger free, at any of its restaurants, I revelled in a working lunch at my big desk. The menu cover deliberately looks like a magazine and the resulting salad, with my additions of avocado and chicken, looked pretty as any picture in a food magazine. It came exactly at the stated time, the water was capped and the breads were really hot. What more could a working gal want?

SEE MY ROOM, BELOW