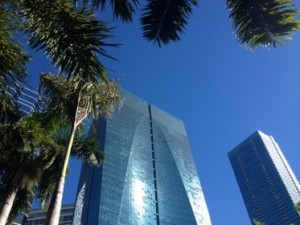 The sculpture that encloses the hotel

More art at the luxury hotel that is Conrad Miami is visible from many blocks away. The Espirito Santo Plaza, on Brickell Avenue between 13th and 14th Streets, is itself a 34-floor sculpture, by architects Kohn Pedersen Fox. The hotel is floors ground to three, for meetings, and 17-24, for its 203 bedrooms, and 25 for reception, eatertainment and generally hanging around, so to speak. Above are 105 letting residences, very popular with bankers working in the surrounding Financial District, says the gal. In fact the hotel is jolly popular all round – average stay is 2.5 nights and 30 percent of those checking in are repeaters. There could well be even longer stays after March 2015, by the way, when Conrad Miami launches Shop The City packages.

This is a hotel for a 24/7 life. The LifeFitness gym, part of the 24th floor Spa, is open round the clock, and with early flights there is checking-in-and-out long before dawn. One guest on the 17th floor was up well before the songbirds, and thoughtfully sat by the elevators, using the hotel’s complimentary WiFi, so that his other half could carry on sleeping – and as soon as Yulio Beracierto, the Cuban who is in charge while his boss is away, heard about it he sent that early-worker tea or coffee. Conrad, says the Cuban – who was himself in by 6.30 a.m. – is never saying no, and thinking ahead what people might like.

So bedrooms have pairs of sockets either side of beds, and there are running maps, two to six miles, and piles of serious newspapers, including the Financial Times, as you exit elevators on the 25th floor (so much easier than having to fiddle around trying to extract a newspaper, which you do not necessarily want, from inside a fabric bag that has been packed, and delivered, by a high-cost someone). There is a pre-breakfast to-go table and an afternoon tea table, and for HHonors and American Express FHR members there are cocktails in the Wine Bar, and for anyone there is buy-Veuve Clicquot, Wednesdays through Fridays any time. You know it is night-time, by the way, when the screens on the fronts of the three front desk tables show blazing fires…

By day it is quite the other way. As the sun rises outside the all-glass walls of the 25th floor, front desk fronts turn to moving images of shoals of exotic fish. This is when some take their breakfast coffee to sit at one of the tall tables on the intimate 25th floor terrace, looking out at Brickell Bay. And this is the hour to leave this luxury hotel (where does the agenda say, next?). A keen young guy destined for the top, Sergio Malic, drives a hotel Audi to the airport, telling me about his forthcoming honeymoon to Europe, including Amsterdam for its new Waldorf Astoria. This team really understands the term ‘Hilton family‘, through and through.