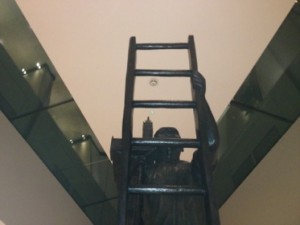 Climbing upwards, in the hotel lobby

Elevating itself is what the entire ambitious world wants to do and the luxury hotel that is now Conrad London St James is doing that fast.  Come out of St James’ tube (subway underground) station, cross Broadway, an easy street to cross, and you are ushered in through glass doors by a young Scotsman in tweeds. The lobby within is dominated by this Tom Clark sculpture, based on Donny Osmond’s words, ‘If you’re climbing the ladder of life, you go rung by rung, one step at a time. Don’t look too far up, set your goals high but take one step at a time’. The gal decided to make a living sculpture. 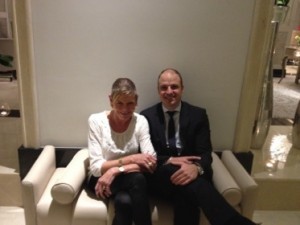 The hero of this real-person artwork is Chris Jung, the one-time owner of a tennis academy, Cape Town bar manager and, in his native Germany, paramedic.  Now he is the extremely capable GM of this 256-room hotel  (I do not know what it is about Conrad but they do seem to have really interesting bosses these days who do exciting things in the hotels they run – I think back to recent visits, chronologically in reverse, to Miami, Hong Kong, Phuket, Dubai, Tokyo, Pezula and Seoul). Chris Jung is still living in the hotel, and we agreed that having easily-accessible, and carpeted, fire stairs is great for the calorie count. 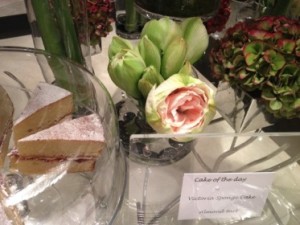 An enhanced afternoon tea, with choice of very-English cakes

From the lobby, it was 23 stairs down to the 24/7 gym.  Alternatively, it was 103 stairs up to the fifth floor, which was my base.  545 is an end suite, and I loved the welcome berries, and Aromatherapy Associates toiletries, so easy to identify, to open and to use – one of Mr Jung’s enhancements is to introduce that company’s Refinery toiletries for the men.  He is bringing in so much.  He has elevated afternoon tea, which is now served in Emmeline, after suffragette Emmeline Pankhurst – being merely 300 yards, along Tothill Street, from Parliament Square, there is lots of parliament-branding here, including cartoons of Mrs Thatcher and T. Blair in Blue Boar Bar. 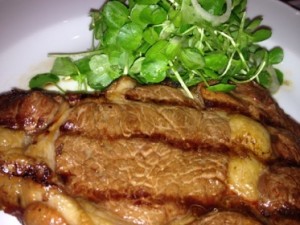 The all-day restaurant is also Blue Boar, and it is both elegant and comfy.  Sugar, real square lumps of white or brown, is in a Regency silver bowl with tongs, and breakfast yoghurt is Loseley, to go with the Twining’s (the tea that, funnily enough, is Tata owned, and Tata’s own Taj hotels are nearest neighbours to Conrad London St James as far as hotels go). But, with its heavy wood vertical borders and a Smith & Wollensky-type table-setting, this becomes the definitive steak house at lunch and dinner.  It stresses British produce, seasonality, showcasing provenance, quality and consistency. Beef is minimum 21-day aged, from Aberdeenshire, fish is from Rupert, in Redruth. Cheeses, including a Wookey Hole cave-aged Cheddar, come on Mondays. 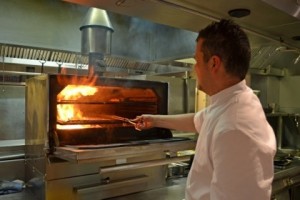 .. cooked on a Josper Grill

Actually they call this a smoke-house. My Cornish mackerel starter was cold smoked over ashwood, on a Bradley Smoker. My ribeye came from a Josper grill, which seals the flavour at 500 degrees Centigrade.  We talked food, and then moved on to shopping.  It is this luxury hotel that will launch Conrad’s forthcoming Shop the City concept. Stay two nights and have your choice of a (Tata owned, again) Land Rover escort to any three of these esteemed emporia, Bremont, Fortnum & Mason, Harvey Nichols and Paul Smith, with private tours at each. Wow, the thought of spending two nights here would be bliss – next time I could have the delectable-looking steak tartare, even though it does not require either grill, and more of that yoghurt off the breakfast buffet, which is, by the way, another Chris Jung introduction.