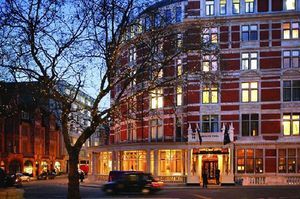 From brand-new in Tokyo to traditional in London, oh what a life of luxury hotels for the gal.  Now it is time to descend, sorry, alight (as a butterfly) on The Connaught. First, a bit of history.  It opened 1815 as the Prince of Saxe Coburg hotel and, after re-do and re-opening in 1897, it was re-named, in 1917, as The Connaught, in honour of Queen Victoria’s third son Prince Arthur, the first Duke of Connaught (V&A Waterfront in Cape Town is named for Her Majesty’s second son, Prince Alfred). Today, the 121-room hotel has, in front, a 20-metre raised decorative pool, by Tadao Ando, that erupts in steam every 15 minutes, like a refined version of the statement-making water ballets at Dubai’s Burj Khalifa and Las Vegas’ Bellagio. 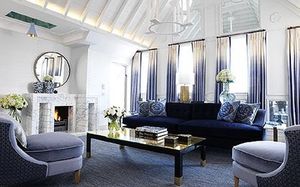 The airy and light Apartment

But the Maybourne Group, owner and operator of The Connaught, is up to the minute, and leading, when it comes to design.  As well as the Tadao Ando, the top, sixth, floor has one of the world’s most memorable suites, the Apartment, designed by the late David Collins and opened 2009.  I stayed in the main, one-bedroom apartment (you can add another bedroom), with working fire in the corner-set Art Deco marble fireplace, and, outside, big terraces for looking at London’s skyline, and relaxing. Inside, I had an eight-seat dining room with cat-flap so the butler could put food through without being seen. 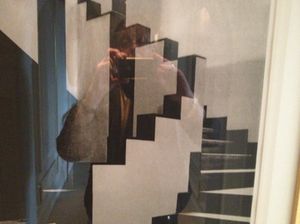 A mirage – reflection in a photo on an Apartment wall

The master bedroom has a cream-curtained four-post bed, and a chaise longue, and white linen curtains somewhat impractically decorated in cut-out petal shapes.  The salon has a soaring white cathedral-type ceiling from which hangs a four-foot chandelier like a tubular lampshade that has lost its cover.  One of the two mirrored coffee tables holds books that include a Calatrava architectural retrospective that must weigh 20 kilos.  Somewhat incongruously, artwork includes a black and white photograph of unadorned stairs.  I took lots of stairs, by the way, down to the 24/7 gym (Technogym, with oodles of perfect bananas), but no time for the Aman spa or pool. 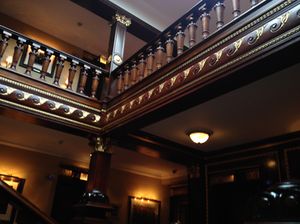 Looking up, from the lobby

New, and old… the main public areas are a delight.  You enter through the one door, and ahead is the type of concierge desk that would feature in Downton Abbey.  It is wood, and slightly curved.  Behind is an oil painting of hunting boots.  Look behind to cubby-holes, one for each bedroom, each with an old-fashioned key hanging (the hotel of course now uses pressure-pad keycards). The other side of what is a small, intimate lobby is reception, where chic young women wear red cravats that exactly match the red wall behind them.  What style.  People are coming and going the whole time, perhaps to the Hélène Darroze restaurant (two Michelin stars), or the sleek Connaught bar or the cosy club-like Coburg Bar. 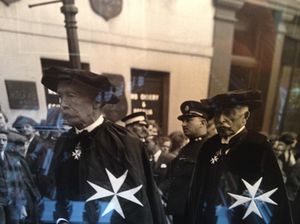 A Knights of The Garter parade, on a wall

Look up, through the five-floor open atrium and its historic, wood and gold, staircase.  Those who do not take one of the two chocolate-box-like elevators have the joy, as they climb the red and green-striped stair carpeting, of an art gallery on the way. There are oils of stately ladies past, and favourite dogs, and fascinating black and white photos of the Duke of Connaught at all stages of his life, including taking part in a Knights of The Garter parade. There is even a labeled photo of a castle in Kabul but I cannot see any sign of the Duke in that one.  It is 130 steps, exactly, from the lobby to my gorgeous sixth floor home and I had a history lesson every time up, and down. 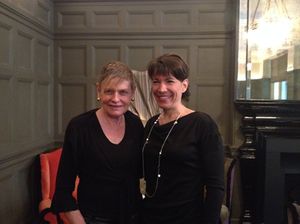 Nathalie Seiler-Hayez, in charge, with style

I have a lesson in style, too, every time in this luxury hotel, which is led by the lovely Nathalie Seiler-Hayez, who is the leader of French-plus-Swiss style. Take my breakfast, which was perfection. Yoghurt? Ordinary or Greek – and when it comes, it has a complimentary bowl of fresh berries. The excellent coffee comes in a shiny silver Regency pot, and a replenishment, with a new cup, is brought just as I was thinking about one.  Oh yes, and the female servers are undoubtedly the most chic breakfast waitresses, anywhere. They wear Nicholas Oakwell’s taupe skirt-suits, with matching waist panel, and pearls, and of course they all have the kind of enviable figures that Mireille Guiliano wrote about in French Women Don’t Get Fat (though one of the staff I talked to is Bulgarian).