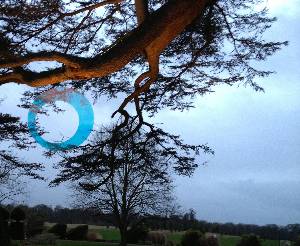 An artwork hangs from a tree...

Sometimes nature so blends with man-made art that you do not know which is which.  Take this blue moon hanging from a tree at The Grove, a so suitably-named luxury hotel 20 minutes north of Heathrow at Chandlers Cross, England.

Is it a moon or is it a circle?  The gal was intrigued, especially since as it swirled in the twilight it changed from blue to pink. The entire The Grove, it seems, is infused with art and nature, inside and out. 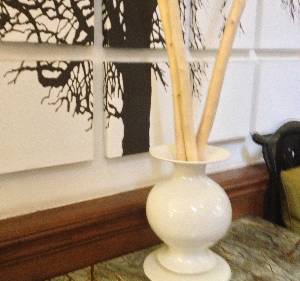 .. while, inside, tree-patterned marble is below a tree drawing

Centrepiece of the rolling 300-acre estate, that runs down to the Grand Union Canal, is the 18th century brick mansion that was built for Thomas Villiers, Earl of Clarendon, one-time British Ambassador to France.

That house now has an endless succession of over-the-top reception rooms.  One has a midnight blue tiered glass chandelier over a table surrounded by midnight blue seating.

Go up the original staircase and you pass a ten-foot black and white photo of a giraffe looking at a white chandelier, which in reality hangs nearby.  A tree-like marble table stands beneath a tree-silhouette blowup, with real twigs in front.  Designer Martin Hulbert, of Mary Fox Linton, has had a field day. 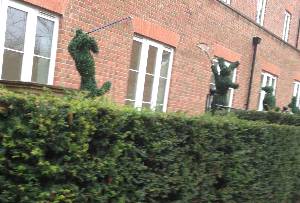 Playful topiary 'bunnies' look as if they are playing golf

The estate includes 18 holes of pay-and-play (yes, anyone) golf, by Kyle Phillips. Behind one hedge, amusingly the gardeners have created a series of topiary rabbits, playing golf.

All around are other sculptures, some supplied by art curator Virginia Grubb.  Walk through the carpark to the walled garden, over three acres of it.  This has an outdoor pool and a summer beach, with real sand.

Walk back to the end of the whole hotel and you get to the spa, by ESPA, with a big indoor pool in a barn, and lots of local inhabitants – all looking like successful CEOs – working out on the Technogym treadmills at 0630. 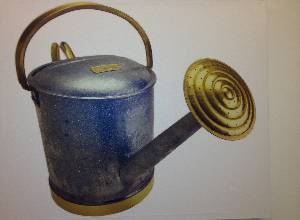 One watering can is not necessarily...

Cleverly you can get to the spa and workout areas without going outside.  With the addition of a new block, this Leading Hotel now has a total of 227 bedrooms, and, well, long corridors.

Along the zigzag walkway to the spa you pass ‘memory points’, to help you find your way back.  There are watering cans displayed on the walls, the watering cans that the clever gardeners at The Grove would have to use, for the topiary rabbits and so on, were England not now synonymous with Enormous Amounts of Rain. 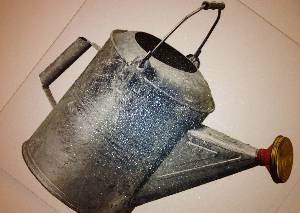 There are dozens of transparent Perspex side tables, each with legs and top filled with one theme – real Barbie dolls, real black feathers, real white feathers, a kids’ farmyard animal set.

Someone, say Martin Hulbert again, has had such fun.  There is also a display around this Leading Hotel of conceptual art by a German, Volker Kuhn.  Stay in suite 18 in the main house and you have a grand piano. 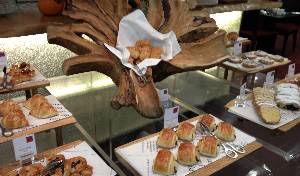 The Grove knows how to display. In The Glasshouse all-day restaurant – one of three dining venues – there is a concept art ‘picture’ formed of 5,000 spoons.  One wonders what happened to the knives and forks…

And oh, the breakfast display here.  I had wondered if another Leading hotel, Twelve Apostles in Camps Bay, had the best breakfast in the world. Nothing, anywhere, is in total THE best but individual elements are.

Twelve Apostles’ breakfast has beetroot juice and the cruise ship-like view over the ocean.  Here you have garden views, and fabulous everything, from Tim’s Greek yoghurt to every berry you can think of, and berry smoothies and oh the home-baked breads, displayed in natural wood sculptures.

The Musetti splecial-blend coffee is amazing (definitely one of the ten best in the world), and one of my friends raved about the banana croissants and another about the fried eggs and fried bread, which the chef, Harry Lomas, brought out in person.