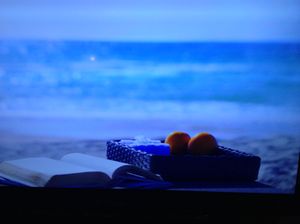 The first thing that greets you in many luxury hotel bedrooms is a television tuned to yet another hotel promotional, not quite showing the inside of bedroom drawers but possibly boring photo shots of major events a few years ago.  At the lovely Setai on Miami Beach’s Collins Street, at 21st street, the slimline Samsung shows stunning still shots that sell the hotel splendidly.  The gal arrived in the dark, and was greeted with a lovely beach scene, white sand and blue sky, a reminder that the hotel, like so many others in the area, backs right on to the beach and its boardwalk. 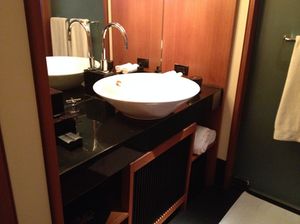 Go into 701, straight to the bathroom

Now the designers of The Setai have done things differently.  First, the shell is typical Miami Beach, a seven-floor flat-topped concrete shell dating back to the 1930s.  Instead of making the interiors contemporary to that time, however, designers Jean-Michel Gathy and Jaya Ibrahim have deliberately brought in Thailand.  Think putting Bangkok’s The Sukhothai in a concrete box, that kind of thing.  Next, they have deliberately turned the formula of the hotel bedroom inside out.  Instead of going in and finding your bathroom to the left, or right, of the tiny interior foyer, here you enter right into the bathroom, or most of it.  Go into suite 701 (nicest of all 77 rooms as it has the one private balcony) and you have washbasins to left and right of the door, the shower to your left and the toilet to the right. 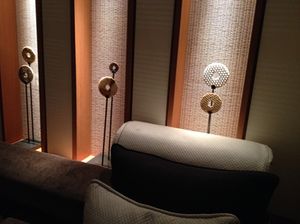 Corner of the bedroom

Go straight ahead, as you enter, is a ceiling-high wall which is the rear of the bedhead.  Go round either side of this and you find, at the bottom of the said bed, the black bathtub, slightly sunk into the floor.  Yes, right there in the bedroom. Next, instead of maximising the space with light colours and minimal trappings, Gathy and Ibrahim have paired sandstone-coloured walls with darkness, black stone-edged teak floors, dark brown and grey furnishings, immoveable dark brown venetian blinds at all windows (coupled with electronic blackout blinds). Wherever space allows they have put Khmer statues, or parts of them.  I am sure that Morris Lapidus, 1902-2001, the Ukrainian-born architect who really ‘made’ Miami Beach – typical of his products are Fontainebleau, and Ritz-Carlton South Beach – would love what he would see today, here at The Setai, a Leading Hotel of the World. 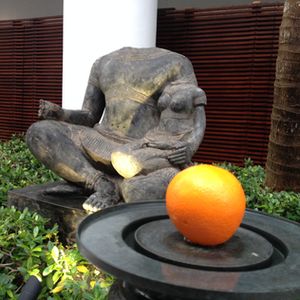 Statue, with real orange, by the spa

There are also Khmer statues in public areas, strategically set at the entrance to the gym and spa, which share a two-floor block in the garden that runs east to the beach. There are more statues around the tennis court-sized decorative pool in the courtyard behind the lobby – this pool has big palms growing up out of it, and it also hosts four sunken seating areas, for about ten each.  Head around this decorative pool, walking east and past the spa-gym, and you come to the functioning pools, three of them, 90 feet each, and parallel one to the other.  Different, right?  But then there are so many different things here.  The boss, Gunter Richter, decided to switch his Asprey’s toiletries as too many others have them (even though he has Asprey’s as one of his two hotel leased-out stores). 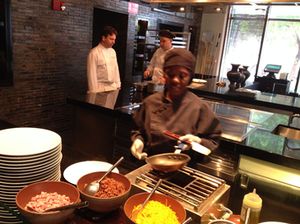 He worked with his friend, parfumier Roja Dove, and now bespoke Roja fragrance makes the bathroom toiletries, and the candles that light public areas at night.  It is a neroli aroma, and absolutely beguiling.  Gunter Richter is an old hand when it comes to partnership and creativity.  This is one reason why the hotel runs at over 90 percent occupancy most of the time – and he says it has the highest average rate in the whole of the great USA.  I would come back for many things, including the breakfast. The buffet is copious and first rate – come Sunday, the brunch is a Taittinger affair. I love having the egg chef right there as part of the buffet. 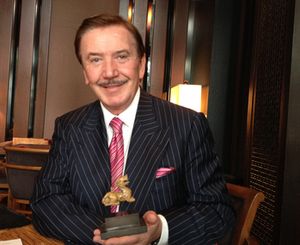 ..at which Gunter Richter celebrates Year of the Horse

And creativity includes bedroom slippers that are proper Asian slip-ons, black plastic that you can wear outside, and room supplies include sensible lined wicker baskets.  And to celebrate the Year of the Horse, VIPs are being given small horse statues.  Gong hai fa choi! Happy New Year.